"Roadblocks are preventing us from getting our product to the ports"

Protests in Ecuador are still ongoing, and the violence has not yet died down. Roadblocks have been put into place since October 3rd, causing difficulties for producers and exporters because they are unable to move their product. Depending on the product, some companies have already experienced losses, while others might be able to get through the situation without harmful consequences – much depends on when the roads will reopen. 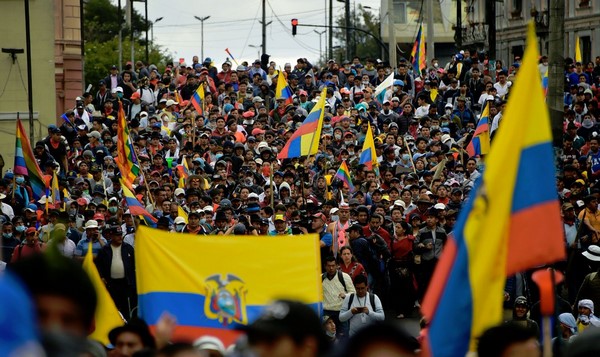 President Lenín Moreno declared a state of emergency on Friday, October 4th. He also put an overnight curfew into place, from 20:00 to 5:00, for Monday October 7th through Sunday October 13th, in specific locations surrounding government installations and buildings. On Monday October 7th, he moved the seat of government from Quito to Guayaquil. This was due to the violence of the protesters and the attacks made on the parliament building in the nation’s capital. Guayaquil, however, is a major port city and many of the country’s exporters have been experiencing issues reaching the city. Several companies have had to halt their exports because they have been unable to get their products to the port.

The main issue which has caused the protests is the fuel subsidy cuts, which has caused a steep increase in fuel prices. This is something that could end up being costly for Ecuadorian producers and exporters who have to move their product from the farms to the packhouses to the ports. Mr. Gomez, CEO and manager of FrutaStar explains: “Many companies need to contract truck companies to transport their product over to the ports. These high fuel prices are a huge issue for them.”

The biggest issue right now for the Ecuadorian companies is the roadblocks. Verónica Núñez, commercial director of Agroeden says: “The roads have been blocked and some of the farms we works with have been unable to get their product to the ports. Mostly, it is very difficult to get the product from the mountainous part of the country to the coast. The roadblocks were first put into place last Thursday, on October 3rd, but it wasn’t too bad yet then – we were still able to get the product to the ports, though it was a bit more difficult than usual. Then on Monday and Tuesday, October 7th and 8th, it became impossible and we haven’t been able to move our product at all. The situation has become violent and so we have to be extra cautious, and we also need to make sure we don’t jeopardize the drivers. So far, we have lost 9 containers of pineapple because we’re unable to get them shipped.”

Fortunately for some companies, the situation hasn’t been too damaging yet. Ecualife specializes in the yellow dragon fruit, and the harvest began just last week. Production center manager Sebastian Jerez says: “We have had to delay the exports, but luckily due to the maturation of the fruit it won’t be an issue as long as the roads will be opened again soon. We fully anticipate that the roads will be reopened by Friday of this week.” If the roads don’t reopen soon, however, the issue can quickly escalate and could lead to major losses.

Banana exporter Banabio is experiencing similar issues. The company’s representative says: “We are located in Machala, which is in the southwest of Ecuador, the traditional banana growing region. Almost 90% of the company’s suppliers are located in Guayaquil and while they have been in constant communication, they can’t get their materials over to us and we have been unable to complete shipments.”

Polish banana importer Citronex has most of their suppliers located in Ecuador. Marek Szulc comments: “We have been affected a little already because we were unable to receive our packing cartons from the carton factories, so we had to use whatever was on hand at our packing stations. Currently, we have all of our bananas loaded up into our containers and we are ready to go as soon as they unblock the roads. Unfortunately we don’t know yet when this will be. We did receive communication from the shipping company that they will delay the shipment to give us and other companies more time to get our products to the port.

Right now our deadline is Saturday, October 12th at 18:00, so if the roads open on October 10th or 11th at the latest we should still be alright. If they don’t open in time, however, we are looking at having to ship a double load next week, which means we will have a week here in Europe with no Ecuadorian bananas, and then the week after there will be an overflow of supply, which could cause major problems in the market. But, we aren’t there yet. Right now all we can do is wait to see what will happen.”