PRE-HLB project: prevention against the spread of HLB in European citrus farming

PRE-HLB is a project funded by the Horizon 2020 Framework Program whose objective is to prevent the entry of Huanglongbing disease (HLB) into Europe and, if it happens, to prepare the necessary mechanisms for its effective control in the short, medium and long term. The PRE-HLB project, launched in Faro on July 23 and 24, 2019, has received 8,001,690 Euro in funding and will be carried out over the next four years.

The Institute of Molecular and Cellular Biology of Plants (IBMCP), a joint center of the Higher Council for Scientific Research (CSIC) and the Polytechnic University of Valencia, coordinates this European project with the collaboration of 24 other partners from nine countries in Europe, America and Asia.

About PRE-HLB
IBMCP researcher Leandro Peña, who leads the project, explained that “the HLB is considered the most devastating of citrus diseases. This is due to its rapid spread, the aggressiveness of its symptoms, the high economic losses it causes, the difficulty of preventing new infections and the lack of lasting control mechanisms. The HLB affects all citrus varieties and patterns, without any resistant genotypes having been found to date.”

The Huanglongbing disease, originally from Southeast Asia, has expanded in just over a decade to almost all citrus growing regions of the world. China, Florida and Brazil, the world's largest citrus producers, are affected by HLB and suffer significant economic losses. The disease is caused by three species of bacteria of the genus Candidatus liberibacter, transmitted by the Trioza erytreae and Diaphorina citri insects. Both insects have been detected in the Azores Islands, in the Canary Islands and in the Iberian Peninsula. Although the bacteria that cause HLB have not yet been detected in the European Union, the risk of entry is high, given the movement of goods and people, as well as the illegal imports of plant material.

“Experience in other regions shows that, once an HLB dispersal insect is present, the spread of the disease is unstoppable as soon as the causative bacterium is introduced. Therefore, it is urgent to take the necessary measures to avoid the introduction of the HLB in Europe and be ready to detect it and eradicate it quickly,” said Leandro Peña.

The first measures proposed in the Pre-HLB project are informative, to raise awareness of the existence of the HLB and its aggressiveness, as well as to train citrus growers in the identification of its symptoms. At the same time, attempts will be made to prevent the arrival of the bacteria by identifying and inspecting the critical entry points. The presence and spread of the vectors will also be monitored. In a second stage, Trioza erytreae dispersion models will be used in different areas of the EU in order to predict their movement; moreover, farm management models will help in the fight against the HLB. New insect control tools will be developed, as well as early diagnostic techniques.

“We hope to limit the spread of the HLB if the epidemic is detected in its early stages. In the long term, PRE-HLB aims for the implementation of new sustainable strategies to limit the impact of HLB, such as the use of biopesticides and antimicrobial products, or the cultivation of varieties and patterns that are resistant to the disease. It also represents a milestone for citrus farming, because it is the first initiative about this disease in which Europe, America and Asia are collaborating. An essential aspect of this collaboration is that, in addition to bringing in partners with extensive experience in the management of the disease, it makes it possible to evaluate the developments made in Europe in field conditions in countries where the HLB is already present,” said Leandro Peña.

The US and the plant protection services of various European countries are also participating through external committees of agents involved. 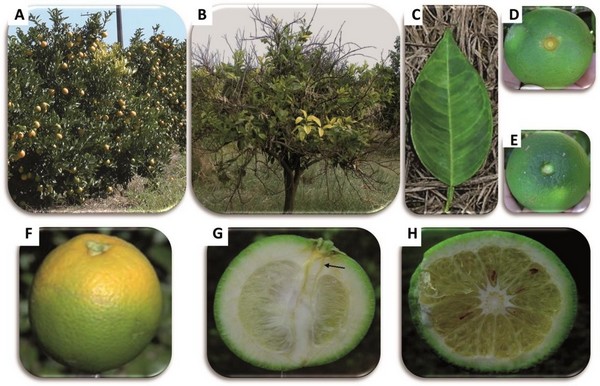 Characteristics of HLB
(A) In the initial stages of the disease, symptomatic trees are characterized by the appearance of yellow leaves that stand out on the tree's green canopy. (B) Loss of leaves in tree infected by HLB. (C) Asymmetric chlorosis in the leaves, characteristic symptom of HLB infection.

(D) Orange coloration in the vascular columella of the peduncular end; in healthy fruits, the color should be pale green (E). (F) Color inversion in fruits when ripe. (G) Deformation and necrosis of vascular columella. (H) Presence of aborted seeds in citrus fruits affected by HLB.