With regard to pears, Italy dominated the events with Santa Maria and Williams Christ. In the meantime, Abate Fetels have increasingly been handled loosely in 15 kg packs. The presence of Carmen was obviously limited. German Williams Christ and Gute Luise played a bigger role in the assortment, Clapp's Liebling played a smaller role. The first domestic Alexander Lucas, Gellert and Conference emerged, right on time. Turkey participated only with Santa Maria. The importance of Dutch Conference and Gellert as well as Spanish Abate Fetel became greater, while Dr. Jules Guyot from France and Limonera from Spain disappeared almost completely from the scene, with dwindling quality features. Belgian Clapps Liebling completed the extensive range of goods.

Sales were going quite differently: the going was rather hard sometimes, while at some places things went better than in the previous weeks. Prices also developed unevenly. In Frankfurt, for example, consumers had to reach deeper into their wallets. In Hamburg, provisions were made for stable prices to meet the moderate demand. In Cologne, prices crumbled slightly due to a weak demand. And in Berlin, the Italian deliveries decreased in volume. 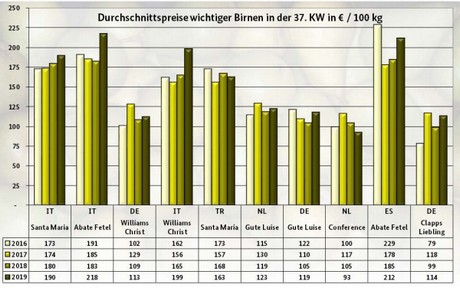 Apples
The domestic influx intensified continuously. Demand was often all right. As a result of the increased availability, the distributors could not maintain their previous prices.

Table grapes
The consumer had access to an extensive range. Discounts were part of the day-to-day business in some places, as the supply had been too large here and there.

Peaches and nectarines
All in all, the availability was a bit limited. Spain dominated the market, followed by Italy. The sales were quite unspectacular and without any noticeable events.

Plums
The presence of Hauszwetschgen, Presenta, Elena and Ortenauer from Germany became more obvious. In view of the abundant supply of domestic goods, the French, Spanish and Italian batches attracted little attention.

Lemons
There was a slight movement in the product range, as imports from South Africa were apparently increasing, while Spanish batches decreased noticeably.

Bananas
Firstly, the distributors had sufficiently matched the inflow from the ripeners to the sales opportunities. On the other hand, both the beginning of school in the south and the autumnal weather were bad for the demand side.

Cauliflower
Germany dominated events here. The lower temperatures had a positive effect on the demand: the sales opportunities widened. Prices mostly went up.

Lettuce
With regard to lettuce, domestic goods shaped the scene. Prices from domestic offers often tended to go up towards the weekend as turnovers accelerated.

Cucumbers
The first Spanish deliveries arrived in different markets. Since these were cheaper than the established Central European batches and are also expected to expand their presence in the next few weeks, the prices often dropped.

Tomatoes
The Netherlands and Belgium dominated the markets here, while Germany and Italy complemented the events. The availability had dropped somewhat in general. But demand had diminished as well. Stocks could not be avoided everywhere.

Sweet peppers
Spanish supplies intensified, putting the batches from Holland under pressure. The Polish batches were a problem for the Dutch exporters as well, because they were cheaper.