The South African top fruit season is drawing to a close with less than 10% of the pear stock and 15-20% of apples left.

It was a mixed season according to Jacques du Preez from Hortgro. “Europe was tough this season, there was a lot of stock from last year and buy local campaigns in Europe also had a lot of focus on conference pears. In the previous season Europe had a down crop so we saw growth in that market, but this year Africa and the Far East have been our main markets.” 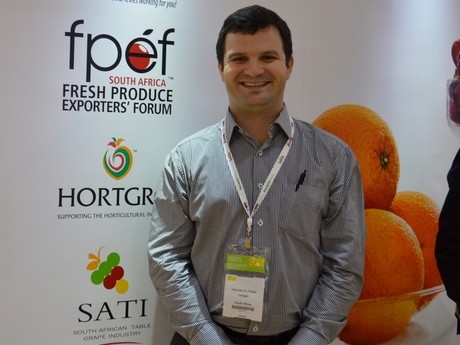 Exports to the UK are down 17% with only 20% of South African apples having been sent there and pears to Europe are down 30%.

At the moment the Far East is ahead on exports, but African exports will run on till January next year so they will catch up and it will equal out.

This season South Africa has seen a massive increase in apple exports to China. “We would normally send 80-90,000 cartons to China, but this season we have sent close to 800,000 cartons. China‘s crop was down 25% which gave us a big opportunity. We don’t expect to have the same figures in the coming season but there will still be new business to be had in China. A lot of new exporters and new cultivars are going into China so the market it will grow as we become established.”

South African pears do not yet have access to China yet, but they are hoping to gain it soon.

“We are still very reliant on Europe for our pears although we have some going to Singapore, Malaysia and the Middle East but pears are not yet as diversified as apples. The growers say that there is a good opportunity for the Forelle pear in Asia. The Asians are not used to the European pear varieties, but we believe the Forelle will work there.”

“The window for us in Europe is getting smaller especially with the increasing production from Eastern Europe, there are a lot of new orchards being planted which is quite concerning for South African exporters. This will put pressure on the traditional exporters to Europe and they are already looking towards the Middle East and Africa. We are also faced with European exporters coming into Africa.”

Most South African top fruit is shipped direct to the UK, so Brexit should not be a big issue. The South African government is in talks with the UK government and there is a concept agreement in place should a no-deal Brexit happen. Jacques believes it will be business as usual, the question is when it comes to what the tariffs will be, but that may an opportunity for South Africa.

Stonefruit
“We are gearing up for the stonefruit season which will start in week 39/40, we hope to bounce back to a normal crop after very low volumes last year. Our potential was 12m cartons of plums, but we only did 8.8m cartons; the reason being the drought conditions and the heatwave we had in October which caused a big drop as the trees were in flowering.”

The drought has broken in the Western Cape but the Klein Karoo, a big production area for stonefruit is still suffering, causing some farmers to go out of business. Some growers have lost 50% of their trees and this year again they have no water.

South Africa is still very reliant on Europe and the UK for stonefruit export, but last year 50% of the apricot production went to the Middle East. The Far Eastern market is still very small with no access to China. “After we get pears into China it will be avocados then stonefruit. We have prioritised plums, but it may take up to four years, so our options are very limited at the moment.”