Apple and Pear Australia Ltd (APAL) believes that India will be a potential and exciting market for Australian growers over the next five years, due to its sheer size, economic development and growing demand for high quality goods and services.

APAL was recently part of a visit to the country which was largely organised by Hort Innovation, and assisted by Austrade, which included a range of other fresh produce peak bodies, which indicated an interest and wanted to learning more about the Indian market. The group which consisted also consisted of table grapes, citrus, stone fruit and avocados visited three cities in six days; New Delhi, Mumbai and Chennai.

APAL's Industry Services and Export Manager Justin Smith says that all involved realised that it needed a lot of groundwork to get started, but this was a great early step.

"They managed to get us in front of either the biggest or most important importers, wholesalers, distributors and retailers, ranging from the city standard to the super premium," he said. "What we all came away with was realising that there was a role for Australia to play but we have got a lot more learning to do. We've all taken that first step now, and it is up to us continue it, in whatever way works each industry. India will be an opportunity that we create based on relationships and trust because it is a tough place to do business. So, continuing to visit will be important if we want to sell fruit there." 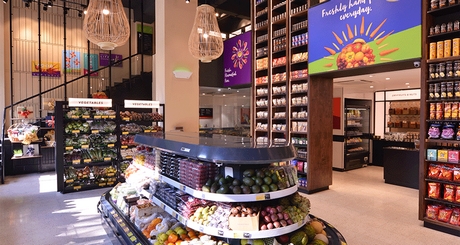 Photo: Natures Basket in Mumbai, an example of new high-end retail in India

Fresh produce faces a 50 per cent tariff for imports into India. While that does provide a challenge, it is one that can be overcome, according to Mr Smith. While market access is open, Australia only has very small volumes entering the country, with the peak industry body admitting that cost a major barrier to trade.

"India is a protectionist country, and quite self-sufficient in terms of its agriculture industry, unlike other countries," he said. "It was being absolutely bombarded with cheap fruit from China, which is the largest producer of apples in the world. It was starting to hurt the Indian growers. India implemented the tariffs to protect their own industry as it was affecting their own farmers. Given they are a northern hemisphere growing area they are not in direct competition to us here. In simple terms we can ask, along the lines that we shouldn't have been targeted in the first place. But what other industries, like the IT sector, have been working towards is selling advanced technology into India, but also putting in development programme into help their industry as well. So, we are considering that, and whether we can do anything like that."

He added that indications from the Australian government are that they are open to working with their Indian counterparts to see if a reduction in tariffs is something they are willing to discuss. Mr Smith was quick to caution that “this is a long and involved process with no guarantees, and regardless of the outcome, India still presents a wonderful opportunity for Australia in terms of trade”.

Another barrier, according to Mr Smith, is that India is driven by commodity apples. Despite a 70 per cent tariff, the United States exports premium Red Delicious apples, but in recent years, Australia's production of the variety has decreased, so growers would not be able to meet supply requirements.

"The opportunity is to start introducing, through the premium retailers, brand varieties of apples," he said. "Whether that is BRAVO™, or Pink Lady®, we may want to introduce that to the premium end of the Indian market that is interested in buying new things like premium varieties of apples and pears. We cannot enter the market and go toe-to-toe on a commodity level. So how do we, as an industry, make headway into premium retailers with high-end fruit that they have never tried before? There are a couple of good test cases; avocados from New Zealand, and Zespri kiwifruit have entered at the premium level, and they are now filtering down to the day-to-day fruit and veggie shops."

However, Mr Smith says there is a small opportunity with the commodity, in the 6-8 week window just before the Northern Hemisphere start picking, given Australia's harvesting is done early in the year.

"When we were over there, in late July and early August, we were seeing the tail end of the northern hemisphere's supply, which they picked in September the year before," Mr Smith explained. "The quality and consistency of the fruit arriving is pretty poor. We were talking to people who were opening containers from the USA, and the attrition rate of what survived is starting to diminish, as the fruit had already been in storage over there for 7-8 months. So, there is an opportunity for us."

Since the increase of the US tariff to 70 per cent, APAL says Indian importers are beginning to make contact with Australian growers, especially for some pear varieties. However, Mr Smith notes that Indian companies are seeking ongoing relationships for their complex market.

"If you look at India, they have more people than Europe, with a land size split into the same number of states, as European countries - and they are all really different," he said. "So, what we need to do next is narrow down the cities we think is right for Australian growers to partner, because not everywhere will work. So, there will need to be a few more trips with growers and exporters coming with us. We have premium fruit that is grown in a clean-green environment and wealthy Indians are starting to prioritise that – if they want it, they’ll pay. Even if we focused on Delhi and Mumbai, that’s 60 million people – if we can claim 10 per cent of those cities – that’s bigger than Sydney or Melbourne."