The demand for pomegranates is increasing worldwide, as the fruit has earned the reputation of being a "superfood". Given the high prices, there is great interest in growing pomegranates and there is also competition on the market. Chile, for example, has lost its market share in Europe to Peru; however, the Peruvian season has come to an end, so prices have started to rise again in Europe. The pomegranates currently on the market come from Spain, where the quality varies greatly. Egypt and Israel are also shipping to the European market. In a few weeks, the market will be taken over by volumes from Turkey. In the United States, Chile is the biggest supplier. The Chinese market is largely self-sufficient. 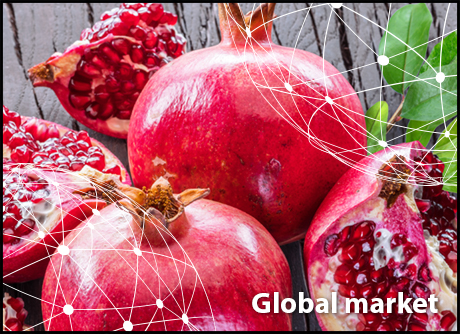 Although the acreage in the production countries has expanded, this season's production is expected to fall compared to the previous one. The prices are high at the moment because there is not much supply available on the market. The price will fall when the campaign reaches its peak in November.

The Netherlands: Pomegranate price dropped, but large sizes hardly available
The price of pomegranates has been very high lately, but a decline has been observed in the last two weeks. There is only a shortage of large sizes," says a Dutch importer. The Spanish season is currently in full swing. This campaign runs until the end of October / beginning of November. According to importers, the quality of Spanish pomegranates varies considerably. The color oscillates from almost white to deep red, and the taste goes from very sweet to sour.

Besides, there are already Egyptian pomegranates on the market, but those volumes are not that big yet. The importer expects that they will increase towards the end of the month. If Turkey comes on the market next month, prices should come under some pressure.

Germany: Greater supply will soon lead to a fall in prices
Until a month ago, the pomegranates available came mostly from Peru. Now the supply from Southern Europe is steadily increasing. The quality of the Peruvian production was generally very suitable for processing into juice. "Pomegranates are a truly trendy product, a 'superfood', and you can see that in the current sales," says a trader.

During the transitional period, the production offered comes partly from Egypt, whose pomegranates are not as good in terms of color. Israeli pomegranates have also been available for over a week. "The Israeli pomegranates are of good quality and taste, and their color is also satisfactory." Lastly, the Spanish harvest has also started and those goods are expected to be available in Western Europe throughout the winter. The first Turkish pomegranates have also hit the market in recent days and the prospect is that the wide supply from various countries will soon lead to a sharp fall in prices.

Spain: Varying quality
The pomegranate harvest is starting in the Spanish provinces of Valencia and Castellon, where there has been an abundance of rainfall in recent days. In the province of Huelva, in southern Spain, the season started in early August. There is therefore no overlap between the various production regions. The production volume this year will be 20 -25% lower compared to last year and there is a lack of large sizes.

The European market is relatively empty now that Peru is no longer supplying. Israel has just started and Turkey has yet to come into production. As a result, the demand for Spanish pomegranates is fairly high, certainly when it comes to the larger sizes. The prices are currently higher than at the start of the previous season, which was a rather difficult one due to the low prices. The growers hope that these prices will continue until the supply of Turkish pomegranates increases significantly.

The first varieties to be harvested are the Acco, Deep Purple, Smith, Emek and Valenciana. The Mollar will follow at the end of September. This is the most planted variety and is popular in Asia due to its high Brix, even though its color is lighter than that of the Wonderful, for example. The harvest of the Wonderful and the Shani Yonai follow after the Mollar.

There are currently large differences in varieties, with sour red varieties and lighter sweet varieties. The market mainly demands red, sweet varieties. This year, two new varieties have been introduced on the market: the Iliana (early) and the Rugalate (late). These varieties are red on the inside, with imperceptible seeds and a high Brix. With this, it is hoped that the pomegranate market will continue to grow.

Italy: The demand exceeds the supply
Pomegranates are seen as a superfood because of the fruit's health properties. The product is increasingly appreciated for squeezing into juice, but there is also a rising interest in fresh pomegranates.

The Italian production regions are located in the south of the country, especially in the Apulia and in Sicily. There is also cultivation in Lazio and Calabria. The most important varieties in Italy are the Wonderful, Akko and Smith, together with a few other local varieties. It is difficult to predict how the season will go, because the harvest has yet to begin; however, the harvest of the early varieties will start soon, 15 days earlier than normal. The first volumes will be sold for high prices. In November, when there is normally more supply on the market, prices will fall somewhat. No quality problems are expected this year. Since the Italian domestic production is unable to meet the demand, the fruit is also imported from countries such as Turkey and Spain. These are also the country's competitors.

Turkey: Acreage is expanding
The Turkish pomegranates are intended for both the domestic market and for export. Due to the high demand, current growers are trying to expand their acreage, and new growers are entering the market. Despite this expansion, the total volume seems to be lower than in the previous season, since there are fewer fruits per tree. However, this ensures that the sizes and quality will be good. In any case, according to a trader, prices are not stable at the moment, because some regions have been hit by diseases, the production of small sizes, and poor coloration, etc. In some cases, the price has doubled as a result. 30% of the production is intended for the processing industry. Only the pomegranates intended for export are stored in refrigerated facilities.

India: Export options in South Asia
So far, the season has been going pretty well for India, although the sizes have turned out to be rather small. However, the demand is growing and some traders expect exports to increase by 20%. The growth should mainly affect the fresh production, and not as much the pomegranates intended for the processing industry. The most important export markets for India are the Middle East and Europe, especially the United Kingdom. Indian exporters are now also trying to find their way into South Asia. The Indian pomegranates are smaller, but have thicker flesh, with soft seeds with a sweet-sour taste. A thicker skin ensures a longer shelf life, which helps when the fruit is intended to be exported.

China: Production drops by 20%
In China, pomegranates are harvested in August and are available until the beginning of November. This year, the production has dropped somewhat due to the extreme dry weather and other climatic conditions. As a result, the total volume has dropped by 20% compared to last year. The main production areas are Sichuan, Yunnan and Henan. Although the volume is still small, the fruit's popularity is growing among consumers. The crop is primarily intended for the domestic market, but there are also exports to North America, Southeast Asia and Australia. Other countries, such as Peru, India and Uzbekistan, are trying to export their pomegranates to China. Negotiations for the necessary protocols are still underway.

Chile: Only US market still interesting
The Chilean pomegranate season lasts from early February to April. Production in Chile is declining because neighboring Peru is starting to take over the market. These pomegranates hit the shelves earlier and are also a lot cheaper. Chilean pomegranates are mainly exported to the US. This is possible thanks to the import barriers imposed by the US on Peru, which do not apply to Chile. Much of the success depends on the season in California. If that season ends early, then the market has much more room for the Chilean product, which was the case this year. There was therefore a high demand for the early varieties. Since pomegranates are seen in the US as a winter product, the demand will drop in the spring. There is also competition with stone fruit and citrus.

United States: Reduction of the acreage
Domestic pomegranates appear to be readily available this year, despite the reduction of the acreage in the US. "The area has been reduced over the last three years," said a trader. "Stocks have shrunk and that is good for the market demand." 15 years ago, planting pomegranates was popular. “Growers of industrial crops started cultivating these fruits because of the good market price and little need for irrigation. Pomegranate juice was popular at the time, but due to the growing supply, the price fell, and now the supply is also down.”

There is currently pomegranate cultivation in the San Joaquin Valley, in California. California has started harvesting the early varieties Early Foothills and Early Wonderfuls and will continue to produce until Thanksgiving (4th Thursday in November). The prices are at a good level, given the demand for the fruit, and can be compared with last year's. In Georgia there is also production, but due to a poor coloring, the volume will probably go to the processing industry.