September to be tight for Louisiana sweet potatoes

Supplies of new crop sweet potatoes in Louisiana are coming into an empty pipeline.

“There’s no old crop left and the new crop is just getting going so the supplies are currently tight. The year-round supply this year will depend on harvest,” says Matt Garber of Iota, La.-based Garber Farms. “But with the pipeline being empty from last year, I think this year’s year-round supply is going to be on the shorter side.”

While harvest started in time in the state, Garber estimates that supplies will be tight until October. “That’s a condition of the sweet potato because when it’s harvested, it’s best to have them cure first. So there’ll be a lot more cured available come the 1st of October,” he notes.

2018’s effect
The tightness comes partly because last year was a short crop. “This year will probably be below average. But because it’s tight, part of the new crop is being taken away right away and we need new crop all the way until the end of September for next year,” says Garber, adding that competing supplies for Louisiana come from Mississippi and North Carolina. “We need a good amount of potatoes industry wide.”
The potatoes that are being harvested right now are on the smaller side but that’s because the new crop is just starting and its expected sizing may change over the coming weeks. 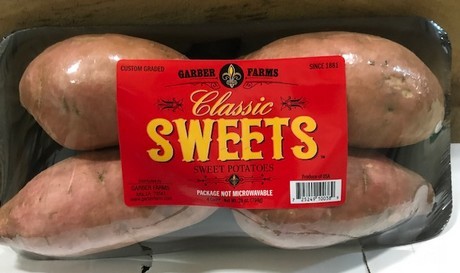 At the same time, demand for sweet potatoes remains strong. “It’s always on the rise,” says Garber. “Maybe not in big leaps and bounds but it’s always growing. We have a very healthy vegetable that tastes good and there’s year-round supply of it so it’s becoming more of a habit to eat.”

Developments in sweet potatoes
At the same time, as an industry, sweet potatoes are becoming more accessible since they continue to appear on store shelves in a variety of ways—in steamer packs, fries, pre-cut packs and more. “We’re covering more of that demand so the consumer has options,” says Garber.

Meanwhile while pricing for now is higher than normal on sweet potatoes given the tight supplies, Garber isn’t sure how that pricing will develop. “We’ve been below profit-making levels for a couple of years. Last year was the crop disasters in almost all areas of production and pricing came up,” he says. “We really need that pricing to stay in order to keep profitable.”