Apart from several mortalities, severe injuries and extensive property damage, Typhoon Lingling, the 13th tropical storm of the season that struck the Korean Peninsula on September 7, has also caused quite some crop damage. As of Sept. 8, the area of crop damage was tentatively calculated at 7,145 hectares (ha). Rice stalks were felled over an area totaling 4,253ha, while 1,735ha of paddy land was inundated. Orchard losses of apples, pears, and other fruit totaled 1,157ha, with another 42ha of vinyl greenhouse damage estimated. 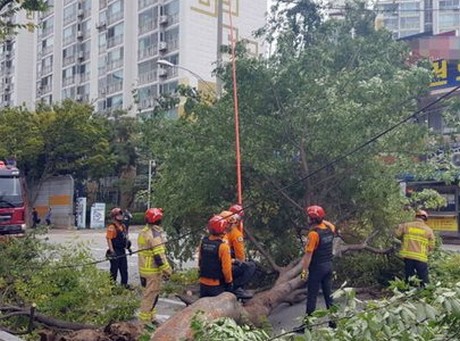 The Central Disaster and Safety Countermeasures Headquarters and the Korea Meteorological Administration (KMA) explained how very strong winds occurred nationwide on Sept. 7 as Lingling moved northward along the West Sea coast. On Heuksan Island in Sinan County, South Jeolla Province, instantaneous wind speeds exceeded to 54.4m per second – the second fastest recorded for the island and the fifth fastest measured for any South Korean typhoon to date.

Damage to North Korea
Various damages also occurred in North Korea as Lingling continued northward. According to official announcements by the North, a total of five deaths and three injuries resulting from the typhoon were reported as of Sept. 8.