As the tail end of Hurricane Dorian touched down in the form of high winds and rain in Nova Scotia, apple growers in the region are left assessing the damage.

Annapolis Valley took a hit
“We’re seeing a lot of apples blown down to the ground. It’s a bit location based. Some farms are okay because they’re sheltered by the mountain or woods or something like that,” says Michael Van Meekeren of Van Meekeren Farms in Kentville, N.S. He notes that the Annapolis Valley region, where many of Van Meekeren’s apple orchards are, received the worst of the wind and rain. “And for agriculture, that’s bad because this is where things grow. There are whole fields of onions where the tops are blown over or fields of corn where all the corn is just laying down.” He adds that on a visit to a Honeycrisp orchard in the area, approximately 40-60 percent of the apples had blown off the trees.

The amount of damage is still being assessed overall. It’s estimated the region received between 50-100 mm. of rain. “The rain doesn’t hurt the apples but when the ground is really, really saturated with rain and then the wind comes, the tree roots and systems are more easily uprooted,” says Van Meekeren, noting that many orchards also operate on wire systems which also saw wind stress. 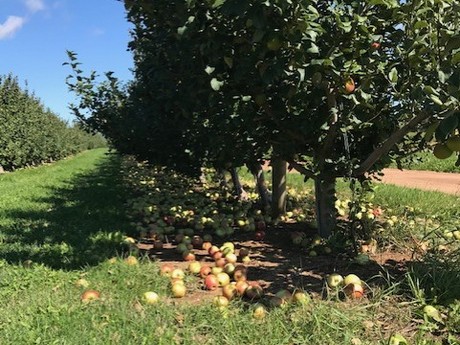 One Honeycrisp orchard Van Meekeren visited saw 40-60 percent of its apples blown off its trees.

Wind damage a concern
The wind rather than rain is the bigger concern. “When the apples blow off the trees, they fall down and probably damage the ones still on the tree. They hit each other and bruise or just by blowing around in the wind, they will rub on tree branches and each other,” says Van Meekeren. “Of the ones that are left on the tree, probably a lower percentage of them are high grade.”

The earlier varieties also seem to be more affected. “Some apples seem to hold on better. The varieties we’re almost ready to harvest were affected more because they’re bigger and heavier,” Van Meekeren says, noting that the Honeycrisp, McIntosh and Pazazz apples were affected, as well as SweeTango in the region. “But the Royal Gala and Red Delicious seem to be in better condition. They’re not great but they’re more than a month away from harvest and a bit smaller and they’ve stayed on the trees a bit better.”

With the warning that Dorian’s affect would be on the way late last week, he did note Van Meekeren harvested more of the apples from the crop it’d already been working through. “We went and picked them on Thursday and Friday because it’s better to have a smaller apple picked than to have one on the ground,” he adds.

At the same time, the power has been out since Saturday evening in the area, which could affect the storage apples which aren’t receiving the refrigeration they would normally. Van Meekeren says that while they’ll know more in the coming weeks about how much of the crop is affected, his estimate is it’s between 50-75 percent that felt some Dorian effect. 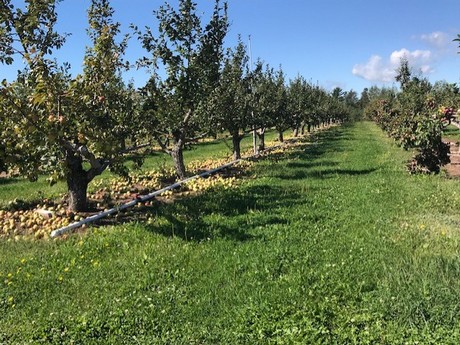 The wind rather than the rain was the bigger concern for apple growers.

Looking ahead
As for where to next, Van Meekeren says it will assess the damage more thoroughly over the next two weeks and growers may change their approach. “They might have been thinking of going to some trees and picking and they’ll probably just leave them,” he says. “And on marketing, we may change our focus. We might have more support from our customers with hurricane-grade fruit or we may have to send more apples to processing or juices or ciders. It’s not that there won’t be a home for them. But it won’t be the same farm-gate value a grower would need.”

Normally, Van Meekeren estimates some five to 25 percent of the crop goes to processing or juicing. “This year, it’ll be a lot more and the overall tonnage will be way down because so much is lying on the ground,” he says, adding that the apples that are on the ground likely don’t have enough flavor and sugar content to send to juicing.

PEI potatoes
Similar to Nova Scotia, the wind was also the main factor on Prince Edward Island, mainly impacting the cereal crops as many fields are flattened. The potato crop on the other hand, fared out relatively well. "The Western part of PEI received the most rain, up to 140 mm," says Greg Donald with the PEI Potato Board. However, the rain disappeared quickly. "PEI's soils are very sandy and forgiving," Donald added. "In addition, it was so dry prior to the last ten days that the crop wasn't impacted as much."

Given that the island's storage harvest is still a couple weeks away, Hurricane Dorian didn't cause delays on harvest. "All in all, the rain didn't help the crop, hurt it a little bit in some areas, but there is still potential for an average crop this year," Donald shared. "We just don't need any more rain, no wind and no frost until the end of October."