At Durban Harbour no containers will be loaded today and all roads in the greater Durban area are very quiet in response to threats of violence against truck drivers. Nervous trucking companies are waiting and watching the situation as there have been more reports of arson on trucks in KwaZulu-Natal, Mpumalanga, Gauteng and the Western Cape over the weekend. At least 20 protesters have been arrested around Durban today.

Similarly, at Port Elizabeth and Coega Harbours no loading is taking place, although the ports are windbound anyway, experiencing winds of over 90 km/h.

In the Western Cape there was a brief blockade of the Piekenierskloofpas out of Citrusdal by trucks this morning, which has since been cleared. There are reports of protests and blockades across the country. 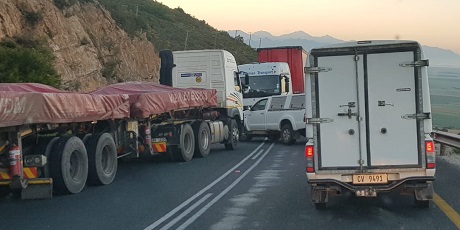 Early this morning: trucks blockading the pass that takes fruit from Citrusdal to Cape Town Harbour

Citrus packing must by necessity continue, as the Western and Eastern Cape are in peak citrus season, but many producers are rather storing pallets in their own cool rooms while waiting to see how the situation unfolds. They are wary to send out their trucks on the roads today.

“One of the most challenging seasons we’ve ever had”
At cool facilities outside Cape Town, which are close to capacity already, loading of containers is greatly reduced and a severe bottleneck is expected when full transport activities again resume.

“This must be one of the most challenging seasons we’ve ever had,” says an industry insider. “Stack dates will again be missed and vessels wait outside harbour costing shipping lines a lot of money.”

While there is no official truck driver strike, and recognised unions representing freight workers have distanced themselves from the demands of the All Truck Drivers Forum that only South African citizens be employed in the industry, the death toll has been rising: reports of around 20 truck drivers killed by protesters since last year. The Zambian High Commission has issued a travel advisory against South Africa.

“It amounts to economic sabotage”
“We already have enough challenges to contend with in the supply chain. The South African fruit export industry with its immense potential for economic growth cannot be held to ransom by chaos and lawlessness on its public roads,” comments Kees Anton van Welie, managing director of African Port Logistics and Infrastructure at Durban Harbour. “The police minister was correct when he stated that these indiscriminate actions amount to economic sabotage. Law enforcement authorities now need to act accordingly.”

The CEO of the Road Freight Association, Gavin Kelly, says that there are systems in place to address concerns like truck drivers from neighbouring countries allegedly employed without possession of work permits.

“We find the violence against truck drivers completely unacceptable. You don’t go around attacking people and vehicles.” He notes that policies regarding the employment of non-South Africans at trucking companies differ, and if there are companies that are not registered with the bargaining council as required by law, or who flout labour laws, they should be policed and dealt with effectively.

The Road Freight Association had an emergency meeting with the South African Police Service last night and there seems to be (if belatedly) a real seriousness to deal with the matter and arrests are being made, he says.