"It's something retailers have never had year-round"

A new brand of pomegranate arils just hit the shelves in Canada last week, with the US market expected to receive them shortly as well. The Royal Brand Pomegranate Arils, from the POM group, have differentiated themselves by making them available year-round. "Retailers are very excited by this because it's something they have never had year-round," said a spokesperson on behalf of the POM Group.

In order to have the arils available year-round, the company is working with all major pomegranate producers and will source from whichever is in season. "POM is leveraging its worldwide sources," he explained. "This includes India, Peru, Chile, Turkey, Israel, United States, Spain, and Egypt, whatever region is in season. Processing them when in season ensures a fresh, year-round supply of arils."

"Demand has increased substantially. With the reported health benefits as well as attention in the media, including social media, more people want to have access to pomegranates. The fruit itself is not one of the easiest to work with, and with consumers asking for more convenience, processing pomegranates into fresh arils increases that access, and also helps introduce new customers to the fruit that haven't yet tried it."

Pomegranates are traditionally a fall fruit, but interestingly it is during the summer months that consumer demand has shown a notable increase. "Arils have so many uses - in salads or as part of other light meal recipes, many of which are favored in the summer," he said. "Therefore, many retailers feel that summer should be the best time to promote pomegranate products like arils. At the same time, arils are also popular as a topper on winter snacks, for example. Having pomegranate arils available year-round will ensure retailers have the opportunity to have them available for customers at any time." 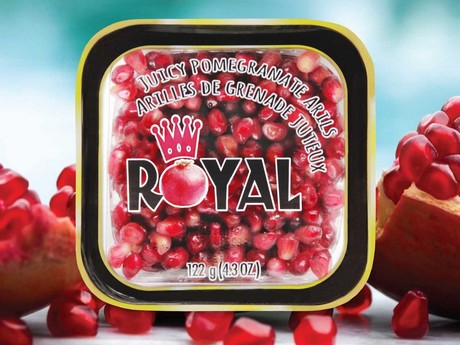 Foodservice and 'backroom' retail included
There is a focus on retail consumers, and therefore the POM Group has made Royal Arils available in retail packs. However, with such a demand for arils in recipes and as an ingredient in meals, the company has also ensured availability for foodservice and also so-called 'backroom' retail - where retailers prepare convenience items in-house.

"We have bulk packs available for that," the representative shared. "Retailers and foodservice companies that prepare meals can then easily add arils to an array of dishes or as a topper. It also encourages creativity for new value-added products. The whole goal is to have them available year-round, which is now possible, and we are very excited about that. It's not surprising then that we have seen an incredible response already to Royal Arils."

Custom pack sizes available
As mentioned at the start, Royal Arils are now available in Canada, but the company is also now preparing for its launch into the US, something the company says will be "starting immediately." As their first release, Royal Arils are available in 122g clamshells and a 1kg food consumer pack. The POM Group is also planning for smaller snack size packs and larger consumer products in the near future.

"Due to the scale of our operation, we have the capability to develop custom pack sizes, including kids, small and multi-packs. We will continue to invest heavily into that as we see an increase in requests. Along with having customizable packs available, we can also provide private label arils."