The mango season is about to transition and North America can expect to see Brazilian mangoes arriving in substantial volumes in less than a week. The Mexico season is winding down prematurely this year, which is in stark contrast to 2018 when the Mexican season continued into October. But there is not expected to be a gap, as the Brazilian season is beginning early.

"Right now, we are transitioning from Mexican Keitts to Brazilian mangoes," said Darrell Genthner of Carbamericas. "The Mexico season is ending earlier than usual this year due to an excessive amount of rain towards the end of the season. We will finish with Keitts early this week and will start on Tommy Atkins and Palmers from Brazil. The Palmer is especially exciting as it is the best eating mango in the western hemisphere."

He added that the Brazil season will go through until October before Ecuador starts up, which is where the potential for a gap might be. "At this stage, Ecuador is due to start in Week 46, which is around November 11. However, this is two weeks later than usual for Ecuador. Mangoes from Ecuador dock in both Philadelphia and Miami, while Brazilian mangoes only dock in Philadelphia."

Mexico season summary
Suppliers were overall very pleased with how the Mexico season went. In spite of the rain late in the season, growing conditions were considered to be very good and quality was consequently also at a high standard.

"We had a great Mexican season," Genthner shared. "The quality was outstanding right up until the end and volume was strong throughout." 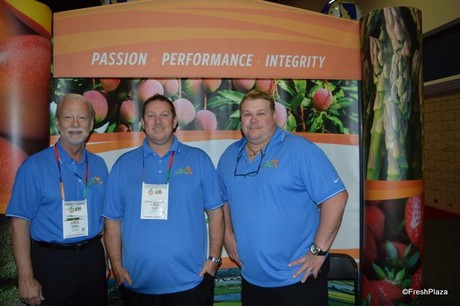 Promising signs for Brazil season
As for the upcoming Brazilian mango season, reports are that conditions have been very good and the fruit is showing signs of good quality and sizing. Genthner said that expectations are for a positive season. "There have been no issues during the growing season and Brazil is in a great position for a very good season in terms of volume, quality and eating experience. All sizes will be available, with the possible exception of XL 6s."

Interestingly, this year, Brazilian mangoes are expected to make it into Texas stores - a market typically dominated by Mexican mangoes, even after the main season ends. This is for the two fold reason of the early finish in Mexico and the early start for Brazil.

"We are expecting to ship Brazilian mangoes into Texas," Genthner explained. "It's usually a market that will continue to import Mexican mangoes even into late September. But this year, there won't be sufficient volume coming out of Mexico to meet demand. Therefore, Brazilian fruit will be able to access a larger market this year."