The Cosmic Crisp is an intriguing hybrid of the popular Honeycrisp and Enterprise varieties that should find its way into some grocery stores by fall. 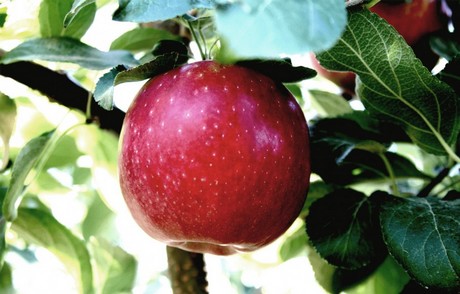 The Cosmic Crisp is the result of more than 20 years of research by Washington State University’s fruit-breeding program to produce apples for both consumers and farmers. What’s remarkable about the new apple is that it can stay in storage up to a year without losing flavor or texture.

“We have done a lot of evaluation, and we are really excited to get it out there for consumers this year,” said Kate Evans, horticulture professor at WSU and lead scientist on the Cosmic Crisp, which was initially developed by WSU emeritus professor Bruce Barritt. “How nice is it to be able to have some confidence that the piece of fruit that you purchase in May is equally edible as the piece of fruit that you purchased in November.”

The science behind creating hybrid apples is well-established, but it takes time to get it right. Enough trees have to grow to maturity to bear fruit, and enough fruit has to be harvested for sampling, storage and other tests. And then there’s the name.

The university used focus groups to taste-test the apple and asked participants what they would call it. One person said the lenticels, or white spots on the apple skin, reminded them of the cosmos. The “crisp” part of the name is a bit more obvious and draws on the consumer popularity of the Honeycrisp, Evans said.

Produce marketing firm Proprietary Variety Management (PVM) will oversee the Cosmic Crisp launch campaign with a $10 million-plus budget, calling it the “largest consumer launch in apple history,” according to The Shelby Report.

Novelty and Familiarity
Evans hopes consumers will embrace the Cosmic Crisp because there’s a lot riding on its success. Millions of pounds of apples are thrown away each year along various points in the supply chain, and consumers have grown wary of varieties that look beautiful on the outside but may taste spongy and flavorless on the inside. The long storage life of the Cosmic Crisp means consumers won’t have to forgo flavor, growers won’t have to worry so much about sell dates, and less food will be wasted.

The project funding came from apple growers through the Washington Tree Fruit Research Commission, which is why the patented Cosmic Crisp will be sold first in its home state before being more widely distributed. Evans said it’s only fair for the state’s growers to get an initial return on their investment.

“It seems a bit bizarre, perhaps, to think of an apple as a piece of intellectual property, but it is,” she said. “In order to protect the intellectual property, which means they have some say in the future of what happens to that apple around the world, we’ve had to license it into different international territories.”

The Cosmic Crisp has tested well in consumer trials, and Evans thinks it will be a hit just in time for fall. Lamberton agreed, saying she expects the consumer testing will be followed up by free in-store samples to entice buyers.