Apricots: Availability was limited as well as quality

The apricot season turned into its home straight. The availability was limited, as was quality. Demand was apparently limited as well. French, Turkish and Spanish shipments formed the basis of the assortment, which was supplemented by Italy. German and Bulgarian products showed up only locally. Marketers reduced their prices due to the slow sales, which helped stabilize prices. In Cologne, the distributors lowered their prices, but this did not really fundamentally boosted sales. In Munich, the quality of the produce left something to be desired, so that the sales slowed down. Only Turkish Sugar Apricots saw real interest there. 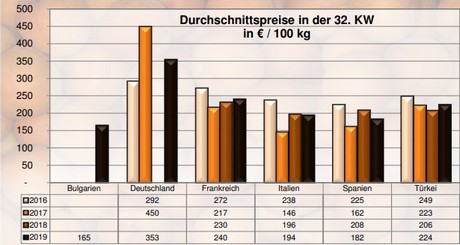 Apples
Imports from the southern hemisphere lost in importance. They generated less demand than before and their presence was limited. Qualitatively, the products were still fine.

Peaches and nectarines
Spain determined events here; Italy was the next big supplier. Greece played a small role and France only complemented the market. Turkey became more important as a supplier.

Plums
Germany dominated here, with Cacaks Schöne, Bühler Frühzwetschge, Top and Katinka and also brought in many other varieties, such as Herman and Hanita.

Lemons
Spain was dominant here, with the Verna. Overall, demand could be settled without difficulty.

Bananas
Demand was not particularly good. The holidays and the extensive offerings of summer fruit reduced marketing possibilities.

Cauliflower
The demand could be covered with domestic shipments. The business was rather sluggish due to temperatures. Nevertheless, prices did not drop off fundamentally.

Lettuce
In the case of lettuce, domestic predominated over Belgian batches. The availability was enough to satisfy the demand. Prices often remained stable, sometimes tending to rise slightly.

Cucumbers
The market offered German, Dutch and Belgian produce. Availability grew and was sufficient to meet the demand.

Tomatoes
The supply situation improved. The Netherlands and Belgium shaped events. Demand could not keep up with the lush supply. All markets reported dropping prices.

Sweet peppers
The Netherlands dominated the market; Turkey and Spain complemented it. Demand could be satisfied without any problems. Prices could differ depending on location and situation.