When hearing about the 105-hectare greenhouse project operated by Agro-Inwest, it’s hard to realize that the first crop of the company only got planted in 2014. The rapidly growing company is located in the Kaluga region, 300 km from Moscow, Russia, and became one of the biggest greenhouses in the world ever since. Produce is sold under their own brand Moe Leto (“My Summer”). 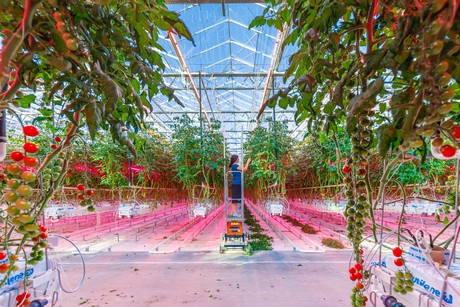 Speed of expansion
“Currently the greenhouse acreage of Agro-Inwest amounts to over 80 hectares and by the end of 2019 the complex area will be increased to 105 hectares,” says Olga Guryeva, General Director with Agro-Inwest. Thanks to the speed of expansion and the level of technique implemented in their greenhouses, the Russian company became one of the most remarkable greenhouse operations in the world – and there are ambitions to go further. “Growth is foreseen both in terms of acreage as well as technological improvements to ensure the maximum amount of production per square meter, without loss of product quality.”

Expansion
So what’s behind this rapid expansion? According to Olga the growth of the company could be attributed to many different factors. “Firstly, the rapid growth of Agro-Inwest is directly related to the healthy nutrition trend which is becoming rather popular in Russia,” she explains. “The market for locally grown vegetables is rapidly growing in Russia and as such Agro-Inwest greenhouses has had to grow to keep up with demand. Secondly, due to the political situation there are certain restrictions on import of foreign products. Accordingly, the demand for nationally grown products is increasing. The market is looking very healthy and on top of this the state is also financially supporting greenhouse business by means of relevant grants and awards.”

Not only the size of the company is remarkable – there’s also the LED project. The total acreage equipped with LEDs will add up to 68.5 hectare – something that the company is really proud of. Olga: “We have implemented a massive project for equipping our greenhouses with LED lighting system. Specialists from Philips have designed a unique and large-scale LED lighting project that simulates natural sunlight, and is compliant with world standards. The project will both reduce costs for power consumption and ensure round-the-clock ripening of each crop. In addition the LED lamp placement close to the middle of the plant allows the plant to receive the maximum amount of light thus increasing the yield.”

In addition, the company grows such exclusive varieties as the exotic giant ‘Mama Mia’. “With an exquisite aroma, juicy pulp and an unusual extravagant shape. Our assortment is quite flexible and is constantly growing and changing depending on the market.”

This includes possible branching out to different growing markets of produce. “We are considering the possibility of growing peppers. Our specialists are carefully studying the market demand for these vegetables. Before taking our first steps into that market we want to determine whether the average Russian consumer is ready to buy high-quality peppers.” Strawberries are not yet specified in strategic plans. “But perhaps this is a matter of the long-term prospect.” 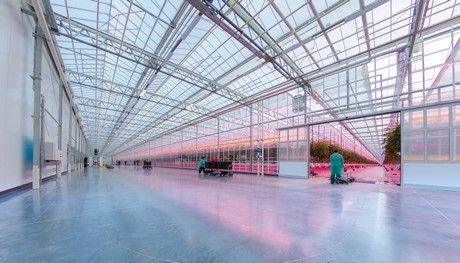 Challenges
One of the main issues that needs immediate solutions with this type of fast growth is labor: Where does one find skilled workers to help run the operation. “We employ a significant number of workers from nearby cities and settlements,” says Olga. “General workers undergo mandatory training courses under the guidance of experienced employees.”

The specialized positions within the enterprise are held by graduates of leading Russian universities and specially invited specialists. “We employ many students and graduates of the Agricultural Academy. They come to work as assistants to growers or foremen, with further growth prospects.”

Cooperation
The produce of Agro-Inwest is being sold under their own brand “Moe Leto” (“My Summer”) – something that became incredibly important to the company. “A brand is an essential factor when ensuring customer loyalty,” says Olga. “The brand is important for both the owner and the consumer, as an identifying factor for any product or service. When buying branded and tested products the consumer may be more assured of the quality and safety of the purchased vegetables.”

This goes for their own Moe Leto brand as well. “The brand belongs to us and Agro-Inwest is a well-known manufacturer. People understand that the products are grown in environmentally friendly conditions. Consumers are more likely to buy a product that they understand is healthy and environmentally consciously produced.”

Looking toward the future
So what’s next for Agro-Inwest? Olga continues to see growth in the future of the horticultural sector in Russia. She feels that the current trajectory will continue for a few more years into the future, specifically because the market share of fresh vegetables is currently relatively small in Russia. “Growing vegetables in greenhouse complexes is one of the most promising and rapidly developing segments of the Russian agricultural industry,” she says.

“The share of vegetables in the healthy nutrition of Russians is lower than that of western countries and is four times lower than the required standard amount. This means that there is the potential for substantial growth within the Russian market. Greenhouse growers focus on increasing their vegetable production also to substitute imported products. Today Russia sees rather favorable conditions for the development of the greenhouse business. There are opportunities for successful and profitable production of import-substituting products.”