Pumpkin harvest is in full swing in the Palatinate

At the beginning of July, the very first Hokkaidos were harvested in the Palatinate. Meanwhile, the pumpkin harvest at Pfalzmarkt eG is gaining momentum: in 2019, the Ho 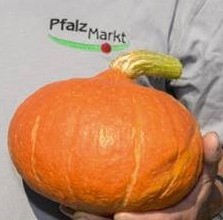 Good yields until the end of October as well as great sales volumes are expected, at last year's level of around 8,430 tonnes. Patisson, Babybear and Bischofsmütze are among the ever growing pumpkin specialties from Germany's largest vegetable garden. The climatically-blessed Palatinate offers the best growing conditions for this superfood, which can last up to eight months after harvesting without any quality losses. Pfalzmarkt eG uses intelligent droplet irrigation to ensure pumpkins in all flavors.

At Pfalzmarkt eG, the pumpkin harvest is going at full speed. Regional and nationwide, consumers have much to look forward to, because pumpkins from the Palatinate are real vitamin and vitality wonders. Versatility in taste and preparation is also reflected in the growing diversity of varieties that characterizes the cultivation in Germany's vegetable garden: In addition to pumpkin classics, such as the Hokkaido or the butternut squash, Germany's market leader for home-grown fruit and vegetables increasingly has more and more pumpkin specialties.

550 ha of land make the Palatinate a major pumpkin producer
As the continuous availability of pumpkins in the food retail trade (LEH) shows by way of example, the vegetables with the largest fruits have meanwhile changed from the autumn classic to the year-round offer. With a cultivation area of ​​currently around 550 hectares, the so-called "tank berries" are therefore among the special heavyweights in the supply portfolio at Pfalzmarkt eG.

Pumpkins from the Palatinate are a true superfood. Pfalzmarkt producer and pumpkin pioneer Gerd Renner from Dannstadt (on the right) and Klaus Selinger, Field Manager at Pfalzmarkt eG, examine Hokkaidos shortly before the harvest. Pictures: Pfalzmarkt eG.

Harvest of the first pumpkins started in early July
Already at the beginning of July, the first growers specialized in pumpkin cultivation started their pumpkin harvest business at Pfalzmarkt eG. Traditionally, the Hokkaido variety delivers the first squash of the new season in the Palatinate. Reinhard Oerther, CEO at Pfalzmarkt eG explains: "Starting from the start, we expect consistent crop yields and sales volumes, which should be at the excellent level of last year."

Forecast: Yield of 8,430 tonnes expected - at last year's level
Last year, the total amount of Pfalzmarkt eG amounted to around 8,430 tonnes of pumpkin plus 416,900 "Halloween pumpkins". Among these are around 199,066 kg of ornamental pumpkins, which are not used for consumption, but only for decorative purposes in autumn.

"Top 3 Pumpkin Bestsellers: Hokkaido, Butternut and Halloween
For the edible pumpkins, the varieties Hokkaido (4,611 tons), Butternut (2,006 tons) and Halloween (416,900 pieces) were the bestsellers from the "Gemüsegarten Pfalz" in 2018. Also important were the organic sales, which amounted to 907 tonnes for organic Hokkaidos and 51.4 tonnes for organic Butternuts. It is particularly important that Pfalzmarkt eG - as Executive Board member Reinhard Oerther emphasizes - "remains on top at the season finale in October, being a reliable pumpkin supplier." Under professional storage conditions such as those at Pfalzmarkt, pumpkins can be kept for up to eight months -at a temperature of between 10 to 13 degrees Celsius - without loss of quality.

Climatically perfect southwest offers the best growing conditions
Pfalzmarkt producer Gerd Renner, who has been one of the pioneers of pumpkin cultivation in the Palatinate for more than 20 years, explains: "Pumpkins require sun, heat and continuous water for an even growth, and they will find almost ideal conditions in the Vorder- and Südpfalz." After being planted in the fields, which can be done from April/May, depending on the variety, the young squash plants are kept moist evenly by droplet irrigation. "Pumpkins love protected locations; the leaves form a natural protective shield, which makes maintenance easier," explains Gerd Renner, who is also the main person responsible for pumpkin cultivation in the company of Andreas Renner in Mutterstadt because of his special passion.

The Palatinate can deliver even during dry conditions
Traditionally, the demand for pumpkins in autumn is particularly high. Due to the possibility of nationwide irrigation, the Palatinate, as the fruit and vegetable garden of Germany, can deliver even in heat and drought. Pfalzmarkt board member Hans-Jörg Friedrich explains: "Their vitality and nutrient richness make pumpkins from the Palatinate a real superfood, which offers retailers a great sales potential beyond the autumn and into Halloween."