This year's European apple production is expected to come to 10,556,000 tons. That is 20% less than last year. It is also 8% less than the average over the past three years. The European pear harvest is expected to be 2,047,000 tons. This is 14% lower than last year and 9% less than the previous three seasons average. These figures are according to the World Apple and Pear Association, WAPA's top fruit prognoses. They presented their report at Prognosfruit this morning.

Apple harvest per country
Poland is Europe's apple-growing giant. This country is expected to process 44% fewer apples. The yield is expected to be 2,710,000 tons. Last year, this was still 4,810,000 tons. In Italy, yields are only three percent lower than last year. According to WAPA, this country will have an apple harvest of 2,195,000 tons. France takes third place. They will even have 12% more apples than last year to process - 1,652,000 tons.

Pear harvest per country
With 511,000 tons, Italy's pear harvest is much lower than last year. It has dropped by 30%. In terms of the average over the previous three seasons, this fruit's yield is 29% lower. In the Netherlands, the pear harvest is expected to be six percent lower, at 379,000 tons. This volume is still 3% more than the average over the last three years. Belgium has 10% fewer pears (331,000 tons) than last year. They are just ahead of Spain. With 311,000 tons, Spain who will harvest four percent more pears.

Apple harvest per variety
The Golden Delicious remains, by far, the largest apple variety in Europe. It is expected that 2,327,000 tons of these apples will be harvested this year. This is three percent less than last year. At 1,467,000 tons, Gala estimations are exactly the same as last year. The European Elstar harvest will also be roughly equivalent to last year. A volume of 355,000 tons of this variety is expected. 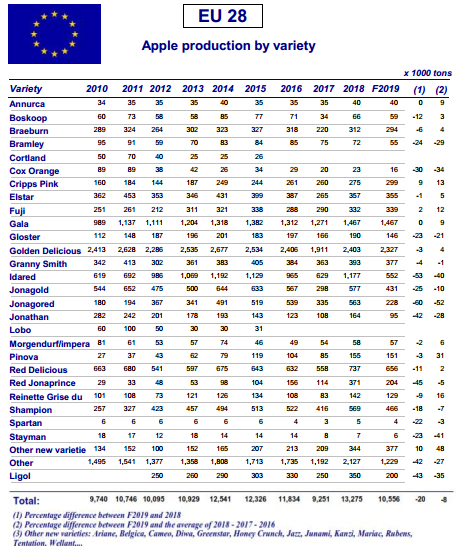 Pear harvest per variety
Looking at the different varieties, the European Conference is estimated to be 8% lower than last year. A volume of 910,000 tons is expected. The low Italian pear estimate will result in 34% fewer Abate Fetel pears (211,000 tons) being available. This is according to WAPA's estimate. This makes this variety smaller than the Williams BC (230.000 ton) in Europe.

Expect more background information and interviews from Prognosfruit in the coming days.