'The European Art of Taste'

This will be the debut in Asia of the Project known as The European Art of Taste, that is financed by the European Union and by the companies that are associated to CSO ITALY: Origine Group, Kingfruit, Joinfruit, Mazzoni, Oranfrizer, RK Growers (Hall 3B stand F20) which will be flanked in the common exhibition area by Infia and CIV, with a collective stand that is 188 m2, which will exhibit and highlight top of the range products and companies that produce fruit and vegetables in Italy.

The European Art of Taste Project, which will be active for three years from 2019 to 2021, envisages significant communication activities on the markets in Hong Kong, China, Taiwan and Japan with a total budget of 3.6 million Euro. 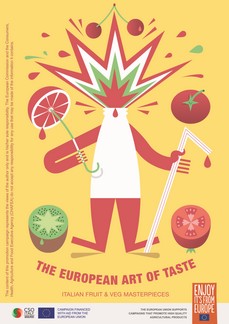 The Asia Fruit Logistica Exhibition will be a veritable springboard for the content of the project in Asia, and it will see the presence of the top managers of the Italian companies that will take part, as well as the distribution of specialised informative material during the exhibition, and the organization of an evening event especially for the media.

The exhibition area will offer the opportunity to welcome customers with a sampling of Made in Italy gourmet products prepared for the occasion by the Italian catering firm Sapori di Maggio and Chef Marco Maggio, whose HQ are in Hong Kong.

Italy boasts a long-standing tradition as a leading producer in the fruit and vegetable sector in Europe, and it is appreciated around the world for the quality of its products, which are grown according to strict regulations that ensure the safety and healthfulness of the products. For over 30 years, the production of Italian fruit and vegetables has been carried out according to integrated production regulations, which have become a model for Europe.

This production area, which is especially suited to growing fruit and vegetables, allows for a unique and distinctive quality to be obtained.

Kiwis are the main products that are available on the Asian markets in the sales period that goes from November to May.

Recently, Italy has produced over 400,000 tons of kiwis (CSO Italy data) though the productive potential can reach an overall figure of 600,000 tons, and ranks second in the world after China.

Italian kiwis are now available through an integrated production system, and a range that includes different varieties that meet the requirements of the most demanding markets, including green kiwis, yellow kiwis, and red kiwis, which were introduced recently.

In addition to kiwis, in the Italian production sector for Asia, Red Oranges also have a prominent role; these products, which are of an extraordinary quality and have healthful benefits that have been confirmed by numerous scientific studies, are available on the market from November to April.

Some of the most important Italian fruit and vegetable companies are taking part in the European Art of Taste Project:

Mazzoni has been operating for over 60 years in the fresh and frozen fruit and vegetable sector, and it was one of the first companies to introduced integrated systems in the production of fresh and frozen products. A vocation for innovation and research has led the company to extend its range of products with special regard for exportation to European countries, a field it has been operating in since the early ‘50s, by specialising in the production, preserving, and packaging of fresh and organic fruit and vegetables.

Kingfruit is one of the companies that have been a part of the Ceradini Group since 1975. Kingfruit is the natural evolution of the Ceradini brands, which have established themselves in Italy and abroad for the excellence of the kiwi production, which offers a wider range of products for the Italian and overseas markets. Always true to the philosophy which Ceradini is based upon, it has made sustainable management, product research, and the guarantee of wholesomeness of its products a veritable mission, becoming appreciated around the world for its quality.

Jingold was established to safeguard and disseminate the excellence of the Italian yellow fleshed kiwi, a product that is renowned and appreciated around the world for its unique flavour and for its extraordinary properties. In 2001, the establishment of the Kiwigold Consortium, which brings together the best companies in Emilia Romagna, obtained the world exclusive for the production and sale of yellow fleshed kiwis. In 2012, Jingold was established with the objective of enhancing and marketing this unique product in Italy and in the world.

Joinfruit relies on a production area that extends from the north to the south of Italy, with its HQ in Verzuolo, in Piedmont. The credibility of the partners (Sanifrutta, Ponso, Trybeca and Maero Frutta) and the strong philosophy which is aimed at promoting Italian products as effectively as possible, has led them to becoming a unique company on the international marketing scene, as it always places the safeguarding of its producers at the centre of its focus, as demonstrated by the quality certification that it has gained over the years.

RK Growers brings together the most important Italian and overseas producers, which has led them to becoming suppliers of fruit and vegetables for supermarket chains around the world, by offering a wide range of products with unique characteristics, and by maintaining close ties with the producers. Their vocation for quality has led them to continuously select and choose the varieties that are to be grown and offered on the market, and it has led them to collaborate with the largest companies in the world that have the exclusive to grow products such as the Ambrosia apple and the Arra seedless grape.

Oranfrizer the roots of the company lie in the unique land of Sicily. Since 1962, Oranfrizer has been a leading company in Italy for the production of citrus fruit and fresh fruit juice, which has established it as the main actor on the market for fresh and squeezed red oranges, which it exports around the world. Its commitment and safeguarding of the land enables Oranfrizer to grow fruit and vegetables and citrus fruit directly in the specialised production areas, offering the market products with a unique taste, which it exports and supplies to the Large-scale distribution chain and to traditional markets.

Origine Group is a fruit and vegetable consortium that is specialised in the production and export of kiwis, pears, peaches and nectarines. It was founded in 2015 by twelve big Italian producers that have been operating in the sector for over fifty years; it has become one of the most important businesses thanks to the range it offers, with a constant availability of products, a wide range of brands, and care for the whole production process from the field to the dinner table.

Conserve Italia is a cooperative that was founded in 1976. In 1976 it became equipped with an industrial structure that enabled it to process the fruit grown by the partners directly, placing the company among the most important ones in Italy and abroad in the production and processing of fruit and vegetables. At present, Conserve Italia numbers 51 partners of which 48 are cooperatives to which around 14,000 farmers are associated, in Italy and abroad.