Tripura chief minister Biplab Kumar Deb on Monday flagged off a consignment of 17 tonnes of Kew variety of pineapples and 4,000 pieces of meyer lemons for export to United Arab Emirates (UAE) and Saudi Arabia from Kumarghat.

“This is for the first time Kew variety of pineapples and special types of lemon are being exported to the Middle-East. The consignment would go to Nashik by a special air-conditioned vehicle and from there the products would be specially packed and then shipped through Arabian Sea," deputy director of horticulture department Alak Kanti Dhar told reporters.

After flagging off the consignment at Kumarghat in Unakoti district, CM Deb said that pineapple production has increased this year due to the concentrated government efforts. 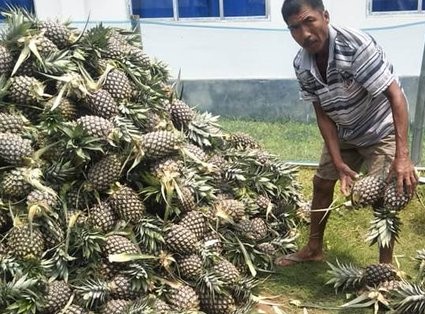 “Around 1,26,000 queen and kew varieties of pineapples have been grown this year, which is 25% more than the previous year. Production increased due to government’s concerted efforts and encouragements to the farmers. After our government came to power, export of pineapples started. Last year, we exported queen variety of pineapples to the Middle-East," Deb said.

On June 3 last year, Deb had flagged off the first consignment of queen pineapples from the state for export to Dubai.

On June 7 last year, President Ram Nath Kovind had declared Tripura's queen variety pineapple as the state fruit and had said that its export was a major step in connecting the state with world trade.