The California stone fruit season has settled and is delivering steady volumes and pricing, according to suppliers. Fruit movement is said to be consistent and quality is reportedly high also. With the volumes that are entering the market now and into August, growers say there should be ample opportunities for promotions over the next few weeks.

"Pricing on 2-layer yellow peaches currently ranges from $14.95-$16.95 with the mostly market at $16.95 with many shippers are starting to offer promotional opportunities on 48’s and larger," said one stone fruit supplier. "The nectarine market is a bit stronger, with prices ranging from $16.95-$18.95. Good volumes of white flesh varieties are also available with pricing consistently $2 higher."

It's also around this time of year when plums begin to peak in the California growing regions. Along with other stone fruit varieties, volumes on plums are also reported to be excellent. "Strong volumes of Owen T plums are available with prices ranging from $18.95-$22.95," the supplier noted. "Look for these pricing levels to remain fairly steady as California stone fruit growers and shippers continue to harvest excellent volumes." 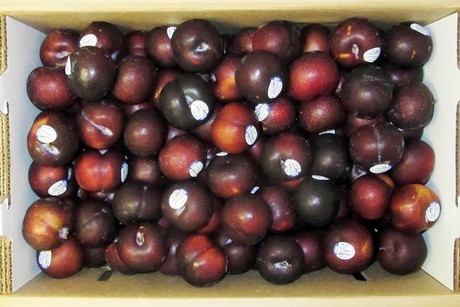 Cherry season begins to wind down in Northwest
For early stone fruit like cherries, the season is beginning to wind down in the Pacific Northwest. There is still a good amount of fruit coming out of this region, but production has been hampered by rain and the recent downgrade of expected final volumes was a bit of a shock to some growers and prompted a rise in the market. Pricing currently ranges from $36.90 - $42.90 depending on fruit sizes, with larger sized fruit attracting the premium.

"Northwest cherry availability has been steadily declining as growers and shippers begin winding down for the year," the supplier said. "Some regions of Washington received scattered rain events, which halted overall production heading into the weekend. The industry was caught a bit off-guard with overall projections coming up short and many growers not being able to meet their commitments."

He concluded by signaling the start of the British Columbia season which will steadily take over from the Northwest over the next couple of weeks. High prices are predicted for when that season begins. "British Columbia is expected to begin packing initial volumes of cherries next week and we can expect to see opening pricing in the mid $50’s."