The global orange market is facing a number of challenges. South African oranges, and citrus fruits in general, are troubled by problems in the ports of Durban and Port Elizabeth. In Argentina, the frost has probably caused considerable damage. Spain also suffered from the weather this season and in Italy the Tristeza virus had some influence on the volume of oranges. The season is currently shifting from countries such as Egypt, Morocco, Spain and Italy to South America, South Africa and Australia. In the United States, the season in California and Florida is coming to an end and the country is switching to imports from suppliers such as Chile. 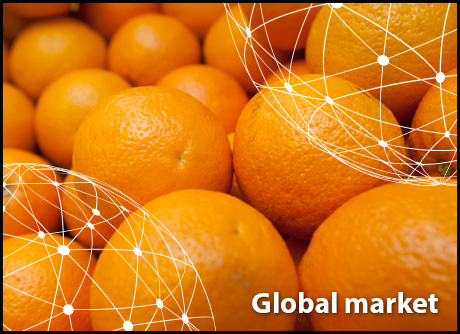 Another challenge in the orange market is diseases such as greening, Black Spot and citrus canker. The EU is adopting strict measures to prevent the spread of these diseases. Every year, Florida continues to recover from the greening that hit many areas and is seeing its production slowly increase again.

The Netherlands: Limited market for early Navels
The supply of early Navel oranges is getting smaller every year. Importers say that fewer Navels are available every year in the first part of the season. This year, the Class 2 volume is high due to the wind damage. As is also the case with Satsuma mandarins, the market for the early Navels is limited. In that period, there are Valencia oranges from Egypt, Morocco and Spain on the market, against which it is practically impossible to compete in terms of price. In the meantime, some areas in South Africa have started with the mid and late-season Navels. These are the better varieties, although it is difficult to get a higher price for them in Europe. The South African Valencia has also arrived and the volume is expected to be slightly lower compared to last year. There have been challenging problems in the last few weeks in South African ports, including Port Elizabeth and Durban, but also in Cape Town, where the wind has caused some delays.

Germany: Moderate demand sets mood in the market
In Germany, the entire citrus market has now hit an impasse, says a trader. The demand is extremely limited due to the presence of summer fruit. Until last week, there was still plenty of Spanish production available on the market. Spanish oranges are actually still available, although South Africa is now preferred. The South African Valencia Late oranges currently dominate the supply. "The quality of the current volumes is very good, and with a wholesale price of 11.50-12.00 Euro per package, the price paid is considered normal for this time of the season," says a trader.

France: Low prices
There are currently Moroccan and Spanish oranges on the market. The season is coming to an end and South African and Uruguayan oranges will be on the market within two weeks. As far as the demand is concerned, it is a bit quieter in the summer months. The prices are therefore quite low. The market will recover and prices will rise within 1 to 2 weeks.

Spain: Weather conditions and overlap do not help
Millions of kilos of oranges were not harvested in Huelva due to poor demand and low prices on the European market. This is mainly due to imports from Egypt and Morocco. Currently, the later varieties of the season, such as the Navelina and Ortanique clementines, are being exported to Germany for a reasonable price.

High summer temperatures and a lack of rainfall have resulted in the production of smaller-sized oranges. The season for the early varieties was delayed by two weeks, causing an overlap on the market. Torrential rains in some regions in the fall also took a toll on the harvest and had an impact on the fruit's quality. In addition to the weather conditions, Spanish fruit also overlapped with that from South Africa, Morocco, Tunisia and Egypt. As a result, Spanish orange prices have been 39% lower on average and their value dropped by 40% this season. Spain is introducing measures to reduce the orange production.

Italy: Tristeza Virus was a challenge this season
Sicily closed the Italian season at the end of June. The European market was dominated by the new Tarocco varieties, such as the TDV, Ippolito, Meli and Sciara. They are appreciated for their pigmentation, taste and size. The season has been characterized by the challenge of finding a balance between the products intended for the fresh market and those for the industry. There was a drop in the production due to the Tristeza virus. The oranges currently arriving to the Italian market come from South Africa and Latin America.

There are late varieties (Valencia Late and Chislett) for which the harvest season starts at the end of June. If kept in cool storage, these varieties can be marketed until August. Small areas devoted to the production of Valencia Late can be found in Sicily, Sardinia, Calabria and Apulia. Italian oranges are threatened by diseases such as the Tristeza virus, which can be tackled with resistant rootstocks, and Exocortite, which can easily spread via pruning tools. Greening, Black Spot and citrus canker have not yet been detected in Italy.

Egypt: Future market leader?
The export of Egyptian oranges is increasing every year. The country's cultivation costs are low, and compared to other producing countries, it has little trouble with the weather conditions. By the end of 2019, Egypt could become the world leader in the export of oranges.

South Africa: Lower yields than expected, congestion in the ports
The harvest of Navels for export is 2.5 million boxes lower than initially estimated at the start of the season (currently, it stands at 24.5 million 15 kg boxes). However, given that the global market is full of oranges (mainly due to Egyptian exports), this has had little influence on the price. The European market is under pressure, but many early Navels have already been shipped to the Far East, as prices are more stable there.

The Valencia harvest has already started in the north of the country. With 51.1 million 15 kg boxes, the yield is slightly lower initially estimated. The total is currently 3 million boxes lower than last year. Exports are slowly starting. There is currently chronic congestion in the ports of Durban and Port-Elizabeth. The lower yields of the Navels are providing some relief, but we'll be seeing a very different story as soon as the high season starts for Valencia oranges.

Argentina: Frost damage in the north
Last week, the province of Entre Ríos was hit by frost, with temperatures falling to -5 °C. This had an impact on the cultivation of oranges and other crops, especially in the departments of Concordia and Federación. Although the extent of the damage cannot yet be assessed, it is expected to be quite large.

Chile: Volumes are 2% lower than last year
The production is going smoothly in Chile. Unlike in Argentina, the growing regions were not negatively affected by the weather, even though the week started with temperatures at 0 °C. In general, the oranges have a good color and are of good quality. Exports totaled around 19,448 tonnes at the end of week 27 and are therefore 2% lower than last year. 95.6% of those shipments were intended for the US, 2.2% for Latin America and 1% for the European market. Small quantities are exported to Canada and the Far East. A large share of the total consists of varieties such as the Fukumoto, Lane Late and Navel Late. Due to the strong demand in the US, growers are becoming increasingly interested in the Cara Cara variety, which is still small.

China: Oranges currently sold for low prices
The season for locally produced oranges has not yet started, with only some early mandarin varieties available here and there. It will be necessary to wait until August to see more local production available on the market. The current supply therefore consists mainly of imported oranges. South African and Australian oranges are gradually entering the Chinese market and their supply will increase in the coming period. The Spanish and Egyptian seasons are coming to an end and the supply is slowly falling. In recent weeks, there hadn't been much supply and the price was high, but due to the new batches on the market, the price is currently lower.

United States: California
The season for Californian Navels lasted until the end of June, which is much later than most growers had anticipated. Normally, the campaign ends in May; however, many varieties were harvested later than they would in an average season. 2018 was a year with little volume and a good demand, while 2019 has been a year with a great volume, but a gloomy market. The price in 2019 amounts to around 13-15 $ / crate; in 2018, it was 16-18 $ / crate. Valencia oranges will continue to be available until September. The demand should pick up again then, when the schools resume their activities. The US also imports Navels from Chile. This season, people expect no gap in the supply of oranges.

United States: Florida
Florida's Valencia season came to a close in June. Until the end of July, the oranges on the shelves will come from cool storage. The growers can look back on a good season with high Brix levels. The healthy soils and good weather have played their part in this.

Florida is a region plagued by both citrus canker and Greening. The production improves every year. This time, the yield has been higher than last season's, and new areas are also being planted. The demand is also good, although there were some problems between April and early May, when there were too many Navels on the market coming from California and other regions.

Australia: Best quality in 7 years
The winter season is just around the corner for Australian oranges. It has been stated that, in terms of quality, this is the best season in seven years. By the end of June 2018, 526,089 tons of oranges worth $ 373 million dollars were grown; an increase of 12%. Exports increased by 16%, to 190,043 tons. The Chinese market has grown by 26%. The market is dominated by the Navels in the winter and the Valencia oranges in the summer.