A massive storm has hit the Northern region of Greece. It had a devastating result om some of the growing areas in Greece, jeopardizing the seasons for peaches, pears, apples and kiwifruit.

The storm tore through a beachfront in one of Greece’s top tourist areas late Wednesday. It also affected some growing areas in the Northern part of Greece. Christina Manossis is the sales manager for Zeus Kiwi and stated there have been damages all over: “We had some major damage in regions of Central Macedonia like Naoussa, Arnissa, Pella, and less in Aridaia region. The produce hit by the bad weather were mainly peaches, pears, apples and kiwifruit. The Xanthi region was hit also by the weather, mainly causing damages to the tobacco cultivation.” 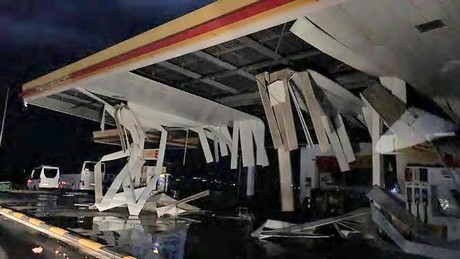 Another region that is having trouble is the Thessaly area. “Tyrnavos specifically is facing problems with their pears, grapes, peaches and in a lesser amount apples. As far as our region goes, which is Pieria, we have been lucky enough to count little damages, mainly found in the northern part of the region which appear minor. We’re not completely sure what the total amount of damages are when it comes to the agricultural crops. The national body of agricultural crop insurance will provide more details about the percentages of damages per region in the next couple of days.”