The South African citrus season is in full swing. Although lower harvests were expected for many varieties, Gijsbert van Leeuwen of Origin Fruit Direct doesn’t fear for shortages on the European market. “The summer holidays aren’t the best period for citrus sales anyway, and besides, demand from markets like China, the US and Russia aren’t really anything to write home about. When these markets aren’t in the picture, Europe is quick to come knocking.” 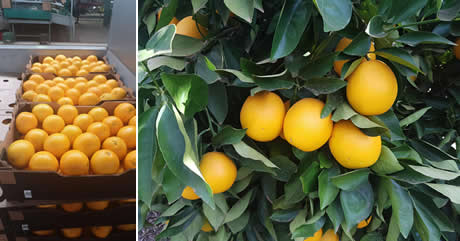 “The supply of Star Ruby grapefruit got started very slowly, but larger volumes have now started arriving. Prices were at a high level, but are now rapidly declining, in part due to the warm weather in Europe, which isn’t great for the consumption of citrus,” says Gijsbert. Sales of South African lemons are mediocre as well. “We recently made the rounds of German supermarkets, and practically all chains are still offering Spanish Verna lemons. The supply of Argentinian lemons is much lower due to rain, because a lot of those lemons aren’t suitable for export, but South Africa is expecting to send more Eurekas, and Spain is still working with Verna.”

“The Clementine season is in full swing. It was expected that ten per cent more Clementines would be sent this way, and that can be seen in the statistics as well. However, supply is selling well, and there’s no oversupply. Prices are stable between 12.50 and 14.50 euro,” the importer continues. According to him, one trend is a shift towards later varieties. “This year, you could see a lot of retailers directly switching from the Spanish Nadorcott season to the Clementines. Varieties like Satsuma in particular are on the market less and less. The same is true for the first Spanish Satsumas. Customers want better tangerines, and they have good alternatives in Nadorcott, Tango or Orri. We’re expecting the first Nadorcott soon, and those prospects are looking good.”

Last but not least, the supply of early Navels is decreasing every year. “Each year, fewer Navels are available in the first half of the season. This year, the volume of Class II is high due to wind damages. Just like with Satsumas, we’re seeing that the market for early Navels is limited. In that period, Valencias from Egypt, Morocco and Spain are on the market, and it’s incredibly hard to compete with these, price-wise. Some regions in South Africa have now started with the mid and later Navels as well. These are the better varieties, although it’s difficult to earn more for these in Europe. The South African Valencias have now started as well, and it’s expected this volume will be slightly lower compared to last year,” Gijsbert says. The problems in the South African ports, including Port Elizabeth and Durban, are challenging, but it’s also challenging in Cape Town, where wind caused delays.