Uneasiness in Chinese market after strong rise in YTD arrivals, while Russian market is “spiralling downwards”

A very marketable crop of grapefruit, with a size distribution peaking on counts 40 and 45 and a higher percentage of class 1 exports over last year, will end earlier this season, which may cause some markets to run short of fruit. The South African industry’s grapefruit focus group notes in a memo that northern growers have switched temporarily to Turkey Valencias in an attempt to stretch the season and that a downward trend in weekly shipping volumes will play out for the rest of the season.

By the end of week 25, 98% of white grapefruit and 79% of red grapefruit had been packed of the 12.69 million 15kg export carton estimate, which is well down from last year’s 15.4 million cartons.

The industry aims to send red grapefruit at least until week 32. 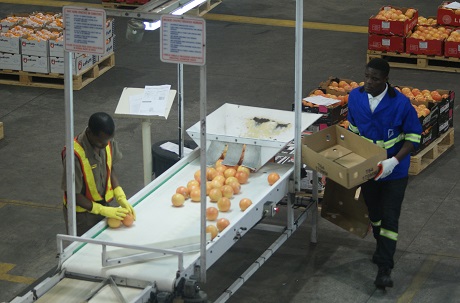 China: over a million fewer boxes of class 1 this year
The Chinese market has been a cause for concern to the industry. In the Chinese wholesale market prices have been on a downward trend, driven by a 30% year-to-date increase in arrivals of Star Ruby when compared to last year and an expectation that there are still five consecutive weeks of big arrivals (200 containers a week) to come. The introduction of conventional vessels has added to this perception, which is expected to keep prices under pressure.

However, the CGA grapefruit focus group predicts that weekly shipments to China/Hong Kong are expected to reduce dramatically from this week onwards, ending with a total volume for the season projected to be very close to a million 15kg equivalent boxes less than in 2018; a reduction of 25%. This, despite notable growth this year in the exports of class 2 and class P (processing) fruit to China.

“We are hoping that the sales tempo in China is maintained over the next few weeks, but that the trade is aware of the fact that volumes will reduce quite sharply and end significantly earlier than in 2018,” states the focus group’s memo.

The rapid growth of class 2 and class P (processing fruit) shipped to China, and the possibility of these ending up on wholesale markets, has been a topic of discussion within the industry. The bulk of this fruit is set to arrive in the coming weeks and the industry is nervously watching whether the fruit is fully absorbed by the intended processing channels, or whether some of it spills over into the wholesale market. 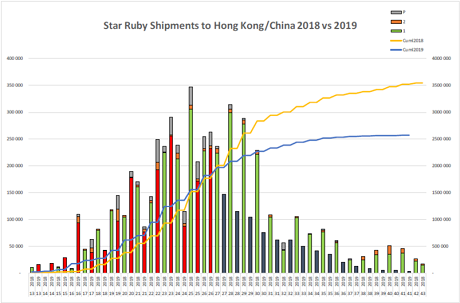 Star Ruby shipments to China/Hong Kong 2018 versus 2019: the yellow line represents 2018, the lower blue line this season. Class 1 fruit is indicated by the green bars, class 2 by the red.

YTD shipping volumes to Korea are also lower compared to last year, 27% less. There have been rejections due to mealybug, a citrus pest which has been benefited by a warm winter, late rain and a change in spray programmes. A similar downward trend in shipping to Korea is expected.

Japan
“Shipping to Japan has been well co-ordinated in 2019 and after the first five conventional vessels have departed, a total of 901,000 boxes of red and 490,000 boxes of white grapefruit have been shipped to Japan,” says the focus group. It continues that with grapefruit volumes coming to a rapid end, it is expected that the sixth and seventh conventional vessels would be the last to carry meaningful volumes of grapefruit to Japan for 2019.

They note that some of the early conventional vessels carried a high proportion of smaller fruit (counts 50 and 55), not ideal for the Japanese market. 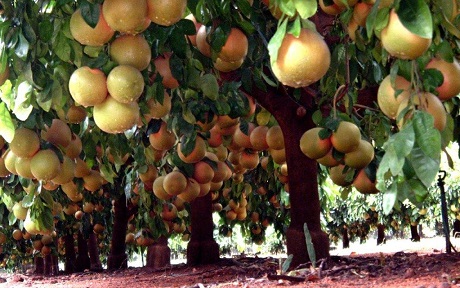 Russia
The situation on the Russian market is “spiralling downward”, says the focus group: after initial very high prices and a relatively empty market, there has developed some consumer resistance. This is compounded by high volumes of grapefruit arrivals very close to each other and now the grapefruit price has fallen drastically. The focus group quotes an exporter who warns that the current price is even below juice breakeven price and that a collapse of the market could be on the cards if further arrivals aren’t delayed.

Above average price levels in Europe
According to the memo, despite two significant shipping volume spikes in week 21 (800,000 cartons) and week 25, year-to-date shipments of Star Ruby to Europe remain almost 0.8m cartons down on 2018. Early pricing has come down marginally as volume increased, but remains steady and at an above average level. It is expected that prices will hold given relatively low levels of arrivals during the coming weeks.

The situation on the Russian market could put additional pressure on the European market where sales rates in general are only expected to start improving towards the end of July.