Usually the situation at Durban Harbour is the citrus industry’s greatest cause for concern but this season the situation at the Port Elizabeth container terminal (PECT) and the new Ngqura (Coega) container terminal (NCT) is “absolute chaos” and “a major crisis”, according to various citrus exporters, affecting fruit exports from the region. Exports are happening but at a very slow pace and if the situation isn’t rectified soon, the citrus industry warns, it could take weeks to stabilise.

“The situation at the harbours is one of the biggest challenges facing the entire industry at the moment, and we’re not even into peak season,” says a shipping agent. “Once operations resume at PECT, it might improve the services out of PECT but the backlog in NCT is so great that unless the critical matters are addressed at NCT, our concerns remain.”

The national peak is anticipated over the next two to three weeks with late navels, lemons, mandarins and Valencias all in full flow. Two-thirds of the Eastern Cape’s crop (and a larger crop than during the past three years at that) will be going through the port over the coming eight to ten weeks.

PE currently without sufficient cranes
There is currently limited loading at the Port Elizabeth container terminal. Last year a container crane at Port Elizabeth toppled over into the harbour due to high winds (while a second crane malfunctioned two months ago), leaving the harbour with only one remaining crane. 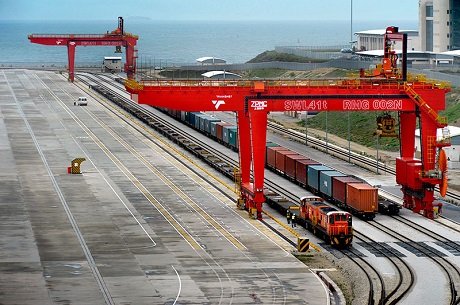 A crane was moved from Durban to Port Elizabeth a few weeks ago and is only due to be in service by the end of the week. The main Europe service had to be diverted to NCT, compounding the constraints on berthing and reefer plug points at NCT, because of the extra vessels calling there.

Drop in navels clears capacity at Durban
The Ngqura harbour is more exposed to wind than Port Elizabeth (25km to the east) and was again down for at least 24 hours on Sunday and Monday due to wind, losing productivity. Wind has intermittently halted operations at NCT over the past few weeks.

Volumes are being diverted to Durban Harbour (which fortuitously has ample capacity at the moment due to the drop in northern navel volumes, but the Valencia peak is imminent) and Cape Town Harbour.
Cape Town is not itself running at full capacity but Western Cape citrus volumes are lower than deciduous fruit volumes, so there, too, extra citrus volumes can be accommodated.

Containers left unloaded due to stack date reduction
Where there are usually three days of stacking allowed to load a ship, because of severe backlogs the stacks are currently 24 hours for a vessel (based on the expected date of berthing). However, because the vessels are then not berthing on schedule, the plug-ins aren’t clearing, affecting the flow of containers into the stack and resulting in many containers left behind.

As ships wait outside the harbour for up to eight days (not unique to Durban; it’s the case at Port Elizabeth too at the moment), turnaround times are poor and FreshPlaza was told of fruit in containers already waiting for 20 days to be loaded at NCT – then add that to the roughly 45 days it takes to the west coast of Canada or Vladivostok, and exporters are having to make difficult decisions on the future of some consignments.

One exporter from the Gamtoos Valley notes that additional logistical arrangements (for instance finding new vessels for containers that couldn’t be loaded onto the scheduled vessel during the single allocated stack date) is taking up 30% more of his time, not to mention the millions in unplanned expenditure. He points out that on the first two vessels on which they’ve loaded this season, the additional plug-in costs came to R105,000 (6,500 euros).

There are containers plugged in and waiting all over the place currently, waiting to go into terminal.

Another exasperated Eastern Cape exporter, who likewise doesn’t want to be named, says it’s as if someone has pressed the self-destruct button at the harbour. “We’re our own biggest enemy at the moment.”

Dissatisfied labour
Transnet employees are allegedly going on a go-slow, despite a new wage agreement signed just over a year ago. The majority government-owned port authority, deeply implicated in the corruption of the Zuma administration and current focus of an enquiry into state capture, has put a brake on procurement processes, causing a backlog of maintenance and labour shortages.

Management apparently made ill-advised changes to its bonus incentive scheme with which employees are unhappy and the morale among staff at the container terminals is very low.

Where the norm is 25 crane moves an hour, NCT is currently running at 6 to 12 moves an hour (it’s about 18 moves at Durban).

Looming shortage of containers
“The whole system is just seriously compounded at the moment at NCT and things are coming to a head. The citrus industry has been growing for a couple of years now and the efficiency levels at the ports are going backwards, converse to each other,” says Mitchell Brooke, CGA logistics development manager, who explains that the industry is in the short-term engaging with port authorities to streamline processes but in the longer term taking it up to the level of national government. “We’ve got to align with the necessary authorities to get the terminals to a point of efficiency so we don’t have all these issues we see at the moment.”

He continues that they expect the situation to worsen if things don’t stabilise immediately because it will take weeks to regain vessel schedule integrity.

The other problem that looms is a shortage of reefer containers as vessels cannot access the port to discharge empties in time. Once a line runs out of empties it takes weeks to replenish. 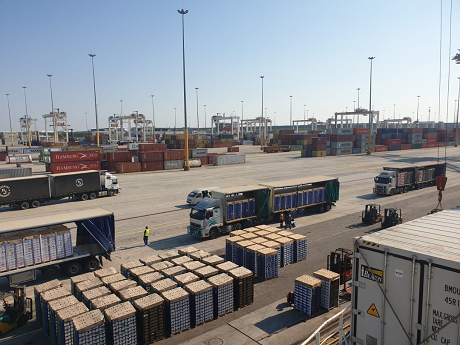 The citrus industry brings in R19 billion (1.2 billion euros) to the country’s struggling economy and has, in fact, already been touted as the successor to the mining industry, as economic growth in other sectors slows down and unemployment increases.

The automotive industry, which together with the citrus industry form the economic backbone of the Eastern Cape, is reportedly equally concerned at the situation at the harbour.