'Walk out' systems are the way forward for retailers

Retailers stand to lose nearly three quarters of shoppers if their experience is too long, or there are problems at the checkout, according to one of Australia’s leading robotics and artificial intelligence solution companies.

Keaton Okkonen, Co-Founder and CEO of Melbourne based company Black.ai, has been working with some of the nation’s leading retailers to help them understand what is happening in their stores. He told Hort Connections that the single priority for supermarkets is reducing the friction at the checkouts. 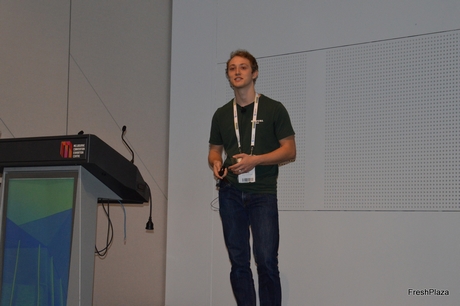 "If you look at the top eight priorities for a consumer, the first one is the ease of shop and checkout experience," Mr said. "74 per cent of shoppers report that they will shop at a competitor if their normal store experience is really consistently long checkout lines."

He says supermarkets and retail outlets can do away with delays by automating parts of the checkout, and that current self-serve options are a stepping stone in technology to future more automated systems. Two prominent ideas include the 'scan and go' and the 'walk-out' systems.

"Walk out systems are like your Amazon Go stores, which is a fully autonomous checkout; that's where you go into your store, enter by tapping your phone," Mr Okkonen said. "The store knows you are there, and there's a lot of sensors in the roof. You just pick up what you want and then you leave. The store understands what you are picking up and charges you accordingly. You don't need to unpack your cart or wait in line - you just go. The second idea is scan and go, which is partial automation. You tap to enter the store, but rather than just taking, you have to deal with the extra step of scanning a barcode on your own."

But he notes that there are several considerations that grocers will need to take into account in training the AI system to recognise what has been taken, as it can be quite expensive to track or barcode every single item appropriately to be recognised by the system. It also requires stores to be laid out differently to regular supermarkets, meaning it can be difficult to retrofit this technology into existing stores. Mr Okkonen concedes that loose items such as fresh produce is quite hard to track.

"If items are not in a box and don't have a barcode on them, they can't easily be tracked," he explained. "So, you see this trend of pre-cut and pre-packaged food. Short of doing this it is almost impossible for an AI store now to understand that you are grabbing a Valencia orange, compared to a Navel orange, for example. Customers hate overpackaging and it also changes the economics of fresh produce, to account for extra processing, reducing the margins for growers."

Black.ai mounts a small number of 3D sensors in a selling space, but Mr Okkonen admits it is nowhere near the scale of Amazon Go, but it offers its own unique services for retailers.

"The cost for Amazon Go for the tracking infrastructure can be around US$1.3-2million, depending on the store," he said. "We can do a full-sized Woolworths store for around AU$200,000, which is actually viable. These things map out the space, detect what's happening, where the people are, what they are doing and understands 18 different skeleton positions of people as they shop, and track those over time to track pick up gestures and behaviours. Taking this approach, it's customer-centric, not object-centric, means we don't need tags, shelf-weights, overpackaging and based on the way we use 3D computing, it makes it easier to retrofit stores."

He told the conference, that deploying sensor infrastructure into a store carries significant benefits to retailers, regardless of automation at the checkout through reducing "shrinkage" through theft and honest mistakes by store assistants.

"An example is that between 3-8 per cent of all transactions of all fresh produce items are put through as the wrong SKU at the checkout," Mr Okkonen said. "So, organic avocados may be put through as regular avocados. This is the statistic for manned cashiers - the self-checkout is much worse. This is honest bleed of produce. If we can understand what this person is doing, we can know exactly where it came from when they enter the checkout space. Also, an average Woolworths store will see about five people a day fill up a trolley and walk out. That may cost $2,000 per week. The second they pass through an area that they shouldn't be exiting from, or the checkouts where they haven't spent the right amount of time at, we can flag that."

He noted there were some problems at the Walmart scan and go store, which had to cease after theft increased significantly, and it was not an effective exercise to scan each bag when leaving the store, and it was turning off customers. However, there is still a strong commercial case for businesses to start investing in these systems now.