Mexico exporting 5 million boxes of grapes weekly to the US

The volume of Mexican grapes crossing into the US has been maintaining a rate of over 5 million boxes per week since early June. Growers say this is very unusual and demonstrates how compressed the season is. The reason for such intensity is believed to be because the early producing regions started later than usual due to cooler weather. On top of that, regions that typically start later have been pushed forward.

“Any day now we are expecting the 20 millionth box to come across the border,” said John Pandol of Pandol Brothers. “This means we are already at 90 percent of estimate with plenty of fruit still to come. So much volume has come across very quickly. Interestingly, we had similar volume two years ago, however that season was more spread out.”

He added that the market has been hungry for grapes, but the question is for how long. “So far, the market has been able to consume much of the volume, but people are beginning to question whether or not we can sell it all. Currently, there is about a weeks’ worth of grapes in warehouses in Nogales, which is actually pretty normal, however this season the number of grapes in a week is quite substantial.” 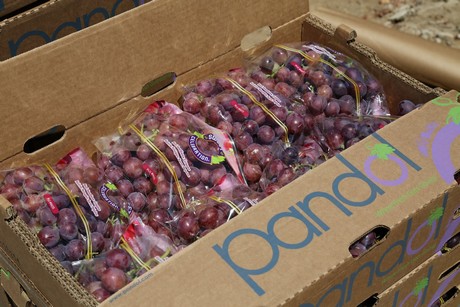 Quality excellent, proprietaries doing well
Suppliers say that grape quality has been excellent out of Mexico, with reports indicating that practically all fruit is passing inspection. Additionally, some of the newer proprietary varieties are doing well and attracting higher prices when compared with traditional varieties.

“We are seeing good sizing, high sugars and overall excellent fruit condition all season,” Pandol observed. “Everything is getting through government inspections, with a 99 percent pass rate, which is very high.”

“In terms of the market, we are seeing the newer varieties doing well, with retailers showing a preference for these over some of the traditional grapes,” he continued. With California’s San Joaquin Valley about to start up in early July however, the pressure is on to clear the Mexican fruit prior to substantial volumes of California grapes entering the market.

“The San Joaquin Valley is due to start in the first or second week of July and by the middle of the month, this region will be in full swing,” Pandol said. “The general thought is that Mexican grapes will need to be cleared out before California really gets going in order for shipper to have a chance to make any money on them.” 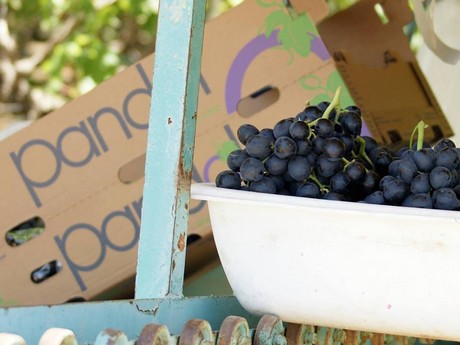 No gap
It comes as no surprise that with the present volume of grapes and building of inventories in the warehouse along the border, there will be no gap between the desert (which includes Mexico and Coachella) and the main California seasons. Pandol said the industry expects consistent supplies throughout this period and provided assurances that any grapes currently sitting in warehouses are in great shape.

“A one-week old grape from the desert is still going to be three to four weeks fresher than anything coming from South America during the import season,” he noted. “Despite concerns that grapes are sitting in warehouses waiting for shipment, the grapes are still very fresh!”

He also said that Pandol Brothers is continuing trials of newer grape varieties. “We are seeing a bigger amount of Sweet Celebration from Mexico, as well as Ivory, Arra 29 and other newer varieties that we are trialing. Growers are learning to adapt them to the local conditions, and we are seeing successful results.”