The book was launched at SATI’s AGM held in the town of De Doorns, in the Hex River region on 23 May 2019. Table grape producers from across the country were in attendance as well as some of the affiliate companies of SATI such as the SAPO Trust, Fruit South Africa and Culdevco. Representatives from the National Agricultural Marketing Council (NAMC), Perishable Produce Export Control Board (PPECB), the Agricultural Research Council's Nietvoorbij facility as well as exporters organisation FPEF were also in attendance.

Several table grape industry stalwarts or pioneers and whose families contributed to the growth of the industry over many decades across the five production regions were also in attendance.

Former chairpersons of SATI were honoured by receiving books namely Johan van Niekerk as well as the father of the immediate past chairperson the late Michael Laubscher who was represented by his father Kosie Laubscher, a veteran grower.

SATI Chairman Fanie Naudé warmly introduced guest speaker Prof Eltie Links, former South African Ambassador to the European Union and Luxembourg. He was also appointed by former President Nelson Mandela as the chief negotiator of the SA EU trade agreement, which paved the way for the audience of table grape producers to benefit from the trade agreement. 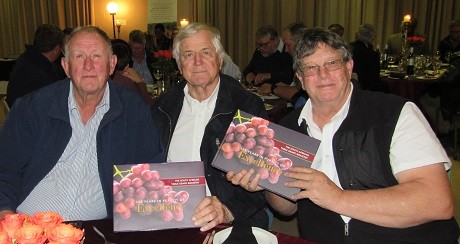 SATI’s CEO Willem Bestbier launched the book by thanking everyone involved “ it is “a proud day for our industry”.

Quoting Marcus Garvey, late 19th century activist and Pan-Africanist, Bestbier said: “A people without the knowledge of their past history, origin and culture is like a tree without roots."

“Therefore the board decided to embark on this ambitious project. Not a formal history book. It is a book about the stories and the people, who have shaped, crafted and grafted the history. It is befitting that we launch the book this year, an extremely difficult and challenging year. This is the time to have a good look again at where we come from, the hard work and courage of those before us,” he continued.

He quoted former US First Lady Michelle Obama: ‘Don't ever underestimate the importance you can have because history has shown us that courage can be contagious and hope can take on a life of its own’.

“May our proud history encourage us all to leave our industry, our farms and our businesses in a better shape and condition to those following us, than we have received it from those before us,” Bestbier encouraged the audience.

The author Fred Meintjes highlighted a few ‘pioneering personalities’ who played a significant role in the industry’s development of the past century. The only two who are still alive received a copy of the book during the launch, namely Aat Hoekstra and Piet Karsten, while JD Kirsten represented his father the late Jan Kirsten.