It’s clear that the top fruit market is a very difficult market this season. There are problems regarding quality and storage, and prices for pears in particular, but also for apples, continue to be far below par. Yet other things can be heard as well. People working with club varieties in particular appear not to be too dissatisfied; these are apples and pears grown and bought by members of the club and are marketed under a brand name and in a club concept.

Guiding
“This year, we managed to market the Red Modoc pears for very acceptable prices for both grower and trade,” says Curd Vanmarcke, Sales Manager for Vergro, a company that has been active in fresh fruit and vegetables for more than 40 years. Curd mentions Red Modoc is an emerging variety – ten hectares were planted during the third and fourth production years, and 25 hectares were planted in the past season. As a result, a modest volume of 80 tonnes of these pears has been marketed this season. These were all sold via a supermarket chain and a number of wholesalers in Belgium during the Christmas period, as Red Modoc has a red skin. 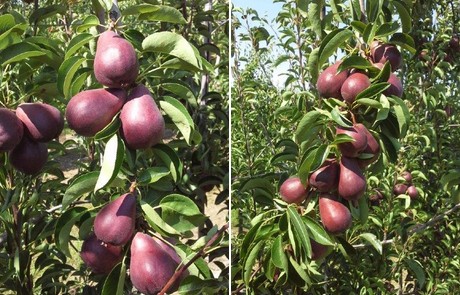 Curd is convinced that it’s a major benefit for pears if marketing and pricing are guided by one hand. “This has a clear advantage compared to freely marketable pear varieties.” The benefit is that low offers are levelled off, so that the market can be approached in a more guiding manner. Curd also sees an advantage in club varieties for apples, although he nuances that apples structurally have an oversupply, causing pressure on prices in Europe. However, he’s convinced club varieties will always do better on the market.

Long-term storage
Although a lot of pears are now faced with storability problems as a result of the warm and dry summer of 2018, the results of storage tests with Red Modoc for the long term are promising. “Up until mid-April in ULO storage without Smartfresh we noticed no problems with discolouration at all,” Curd says. Storage tests are still being conducted for pears that have been treated with Smartfresh after the harvest. The pack-out in Class 1 also turned out to be favourable: according to Curd this was between 90 and 95 per cent in the past season. “It’s a robust pear,” Curd concludes.

More constant pricing
When asked about the experiences of the club variety apple Kanzi® in the past season, Kris Jans, manager for BelOrta in Borgloon, Belgium, says the experiences were different from those in free varieties. “With club varieties, the supply is known better, so that sales can be scheduled better as well.” This leads to more constant pricing. “That’s the case this year as well. We’re still at the same price levels as last year.” Kris mentions club varieties can be more distinctive on the market. “When a grower supplies quality, they’ll be rewarded, and that’s not always the case with free varieties.” 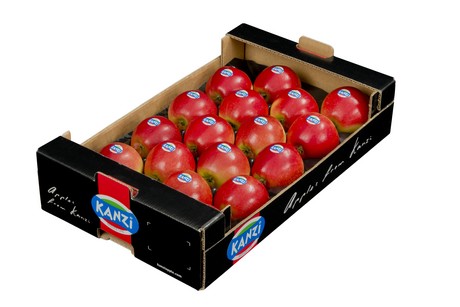 The production of Kanzi® often uses drip irrigation and hail netting. “It’s just a different management compared to standard varieties,” Kris says. He mentions that pack-out is all-decisive in club varieties. “Growers adjust their investments to that. When growers notice that summer pruning, which improves the colouring of the fruits, results in five times more Kanzi® quality, he’ll do that, because it pays for itself.” Another example is investing in a leaf blower. This is used to blow away mesophyll, so that just the grains are left over and sunshine can ensure a maximum colouring of the apples. “Growers will definitely take these measures if they think they’ll be paid for them.” The pack-out of the last harvest year was 63% on average. That’s in line with the average pack-out for Kanzi®. “The higher the percentage of Kanzi® quality, the higher the income,” Kris concludes. “And that’s why we do it.” 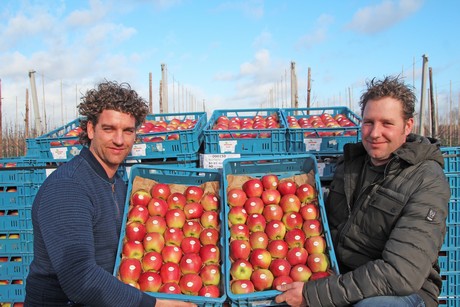 Regarding the Maribelle apples, René Wellner of Roel Wellner Fruit – active in the production and marketing of Maribelle apples – mentions that at the start of the season in November, demand for larger apples fell behind a bit. That demand has now recovered. “In the second half of the season, from March, we’ve seen that all sizes are selling at appealing prices compared to the free varieties.” Maribelle has a pack-out of about 70%. The remainder, which is slightly higher this year because of the warm summer, is popular in processing because they hardly discolour after peeling. “In open production, growers are faced with nature, so the pack-out varies per year. That’s why we intensely look for an added value for the Class 2 apples. After all, apples can’t be printed with 3D printers. We market the entire tree’s crop.”

Sturdy
“It’s a strong apple, and that’s the biggest benefit this year,” René says. The Maribelle apple is sturdy, but requires attention during production to realise a pack-out as high as possible during sorting. This includes a stable growth-balance, attention is paid to irrigation, and by pruning the roots, size of the fruit can be influenced, to name just a few examples. “In future, attention should definitely still be paid to the stands to ensure as many Class 2 apples as possible.”

Maribelle is sold via wholesalers and is available from supermarket chains MCD Boon and Plus. “We want more and more consumers to discover Maribelle,” René says. “Consumers can discover a purely Dutch variety that’s incredibly sustainable and CO2 resistant.” This is mostly expressed in the short transport distances between growers and buyers. “That way, we as Dutch growers can offer Dutch consumers an added value.” 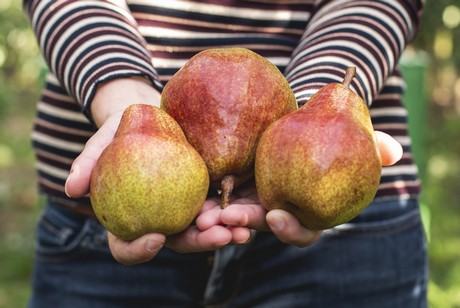 Ton van Wiggen, salesperson of the Sweet Sensation pear for The Greenery, characterises the bad pricing on the top fruit market as challenging this season, with a lot of product of mediocre quality. He thinks it’s very important to supply good quality for concept fruit such as the Sweet Sensation pear, and to support this with marketing and promotion, particularly under these circumstances. “Bringing to the attention of consumers why Sweet Sensation is so different from other pears and that that’s why it’s more expensive. We’ve seen the product being taken up in assortments and selling well.” As a result, prices are hardly different from previous seasons in this difficult season.

Intentional decisions
Ton has noticed that the free varieties Conference and Doyenné du Comice have a lot of quality problems, insides are colouring brown and yellow, and this affects storability. “Sweet Sensation had few to no problems in storage.” This is the result of intentional decisions. During the harvest, the quality of the pears is decided, and based on that and factors like sugar level, firmness, picking times and earlier experiences, decisions are made regarding which grower can market at which time.

At the moment, about 220 hectares of Sweet Sensation are produced in the Netherlands, Belgium is good for 120 hectares, and France contributes 50 hectares. On average, about 60 per cent of this is Sweet Sensation quality. Another 15 percent arrives on the market as Sweet Dored. “Sweet Dored is just below Sweet Sensation, and with it, we’re trying to achieve a position on the market that exceeds regular products regarding pricing and appearance.”