Is the Perpignan-Rungis fruit and vegetable freight line in its final hours?

This Monday morning, the morale of the CGT militants, who have been fighting for months to maintain the Perpignan-Rungis fruit and vegetable freight line, was not in a good shape. "In the aftermath of the ministerial meeting on May 24, some cried victory, and ensured that the freight line between the Saint-Charles platform and Rungis was saved. We can tell you today that this is not true at all. The last train will leave Perpignan on July 15. After that, we'll move on to the trucks." explains Pierre Place, head of the union.

A "first-hand" information according to the french journal l'Indépendent, confirmed by a salaried trade union delegate of one of the two Perpignan transporters: "The relocation of the station's premises has begun. We are currently packing the boxes. Employees should be relocated back into the group, but the train is over. The bad thing is that we were lied to all along." 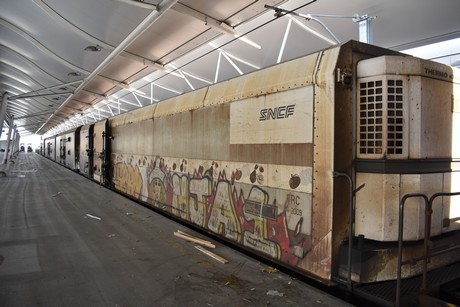 The union once again points to the inconsistency of the situation regarding the investment of the 22 million euros previously granted to Rungis for rail freight. "The transport of fruit and vegetables will be totally by truck," the union continues. And when we know that there is already a shortage of drivers, it is now to be feared that carriers will use foreign labour with the obvious risk of social dumping and a programmed increase in transport costs. And we're not even talking about the ecological consequences."

As we should remember, stopping the line would have a significant ecological impact with the influx of 25,000 additional trucks per year. For the CGT, the fault lies with the SNCF, "and therefore with the State", continues Pierre Place. "We will request an interview with the prefect to explain the seriousness of the situation. The investment required to maintain this line, which is profitable, is only €25 million for refrigerated wagons. We will fight to save this train and the direct and indirect jobs it generates."

A subject that takes on a national dimension
Yesterday, Transport Minister Elisabeth Borne was questioned by Mathilde Panot, a Member of Parliament for France Insoumise, starting her speech with : "Two weeks ago you promised, two weeks ago you lied", then stating that "it is unacceptable to deceive people who are struggling and who thought they had won a victory". The Congressman added to the minister: "your all-truck policy kills", reminding her that "67,000 people die each year from air pollution". She also called for massive investment in rail transport, stating that "over the past 30 years, rail freight has been reduced by a factor of three while the number of trucks on our roads has increased by 40%".

As the journal l'Indépendent pointed out on Monday, the Minister recalled that the line was able to continue under the same conditions as at present until the end of the year. For the future, discussions have begun but the future of the line remains unclear.

To get more information on the subject click here
Source: www.lindependant.fr