A new collaborative robot system that can operate 24 hours a day and reduce workplace injuries, is being showcased at the Australian Banana Industry Congress on the Gold Coast.

Visy Industries Group Service Automation Manager Richard Green says the machine runs at slower speeds when humans are around, meaning there is no need for the safeguard barriers that are normally in place under Workplace Health and Safety regulations.

"When it is in collaborative mode, it will completely stop when it comes in contact with a human," he said. "We can run them a lot faster, but then we need to look at putting something like an area scanner in, so when someone approaches the robot will slow down to a collaborative safe mode." 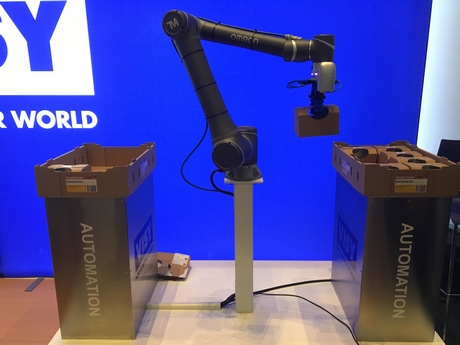 The particular application is demonstrating taking banana punnets and placing them into the tray, but it can be used on a wide range of produce. Part of the Omron Collaborative Series, the robot is versatile and can be tailored to a variety of repetitive packaging tasks to increase efficiency and reduce manual handling costs, and injuries such as repetitive strain injury.

"Production wise, while it does depend on how the fruit is being presented, we could do around 20 per minute," Mr Green said. "It helps company's with the health and safety aspect, reduces repetitive strain injuries. The robot will work 24 hours a day seven days a week - and won't complain." 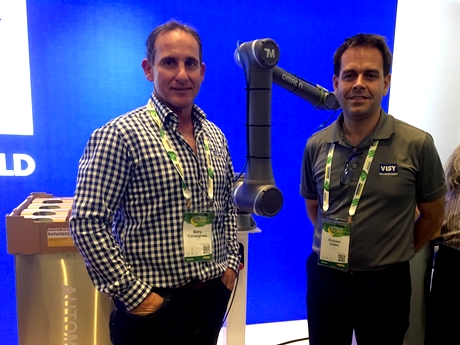 While it is yet to be introduced into the fruit industry yet, the company has developed a number of other robotic palletising systems, as well as providing cardboard banana packaging, as an environmentally friendly option.

"The major supermarkets like Woolworths, Coles and Aldi wanted to reduce plastics," Visy Regional Manager - North Queensland Fibre Packaging Barry Campagnolo said. "So we do source and sell plastic punnets, but we come up with this fibre option, as a plastic replacement. So it's our sustainable solution for our packaging."

Mr Campagnolo says the cartons have been developed between the 15 kilogram one piece, as well as two different two-piece sizes.

"The carton is pretty well proven and does the job," he said. "It protects the fruit better than what it used to. So pre-packs and value adding is probably our main focus for this conference." 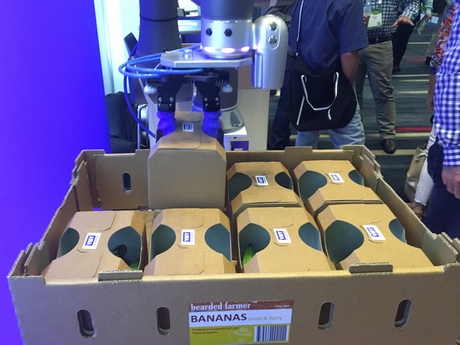 Visy says the products have already received plenty of attention from potential customers.

"It has attracted a lot more interested than I thought, because it (our robot) can do more than just pack punnets into boxes," Mr Campagnolo said. "We have already got two robots in North Queensland that can stack 15 kilo cartons, which have been in for 12 years, and the customers say the machine has more than paid for itself. This one in particular is more for the people who supply the chain stores with pre-pack solutions, where as the loose packs are about getting rid of plastic and making it more environmentally sustainable."