Arizona honeydew melon growers have had to wait until just this past week to begin their harvest. Due to persistently cool temperatures, the melon season was delayed by a number of weeks. But growers are predicting a good season and expect volume to grow now that the season has finally begun.

"Martori Farms' honeydew melon season spans from May to November," said Steve Poindexter of Martori Farms. "Our fields are located in Yuma, Harquahala and Aguila. We started our harvest only just last week which is relatively late compared to the long-term average. Last year for example, we started on April 29. This is due to cooler weather in the lead up and it is still seasonably cool. Day time temperatures are reaching the 90s, with night time temperatures in the 80s. However, within the next week, everything should open up and we can expect better volume."

Demand is strong
As growers concentrate on building volume, the current reality is that supplies are not quite enough to meet demand. The market is strong as it awaits increased volumes from domestic growing regions. Suppliers say there is still Mexican honeydew melons in the pipeline as well. 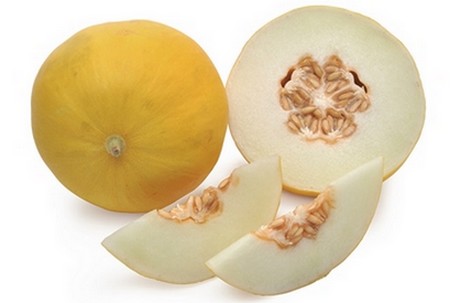 Golden Dewlicious is reaching markets as far as Japan

"The honeydew market in the US is fairly strong," Poindexter observed. "From Mexico, we are seeing lower prices but the quality is only fair. Demand is very good and we are looking forward to getting more volume out into the market. We are expecting excellent demand for Father's Day, followed by the July 4 holiday."

Golden Dewlicious attracting buyers from as far as Japan
One of the specialty melon varieties that Martori Farms grows is the Golden Dewlicious melon. This melon is a hybrid mix with a golden exterior color and white flesh and the season extends from mid May to mid November, paralleling the honeydew season in Arizona. According to Poindexter, this melon variety is particularly sweet and is favored in several markets, including Japan.

"Martori Farms has been growing Golden Dewlicious for 8 - 10 years now," he shared. "This hybrid melon has very high BRIX and a tremendous flavor profile. We ship them all over the US and also export them to Japan, where there is strong demand. They are shipped in our standard cartons and are available in both conventional and organic."