The Dutch iceberg lettuce season has started again. “A few colleague growers harvested their first product before the weekend, but we started on Monday,” says Niels Zuurbier of Kwekerij Ursem-Zuurbier from Heerhugowaard, the Netherlands, who’s associated with grower’s association Everest. “The production is looking well. Because of the cold spring, the numbers are slowly rising.”

Good prices were made for the first iceberg lettuce. “At the start, we had prices around 5.50 euro. It’d be fine with us if prices were to stay like this all season,” Niels laughs. He’s feeling positive about the season. “The share of Spanish iceberg lettuce is decreasing rapidly. Not a lot of lettuce is left on the free market, so that’s looking positive.” 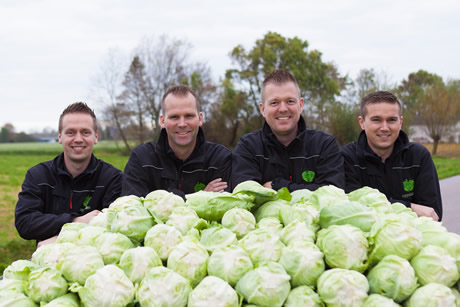 Niels Zuurbier (third from left) and his partners

In total, the Dutch iceberg lettuce area decreased this year. “Some people quit and some growers decided to start growing a different crop. I expect the area decreased by 300 to 400 hectares,” Niels says. “Perhaps this will be good for pricing this season. The consumption of iceberg lettuce hasn’t grown in the past five years, although it’s fairly stable now.”

Grower’s association Everest had one drop-out this year, so four partners are left, three of which are located in North Holland and one in Brabant. Kwekerij Ursem-Zuurbier’s area grew to 300 hectares of iceberg lettuce, oxheart cabbage and aroma cabbage, part of which is organic. “We also did trials with napa cabbage, but that’s not an easy crop to grow in North Holland.” 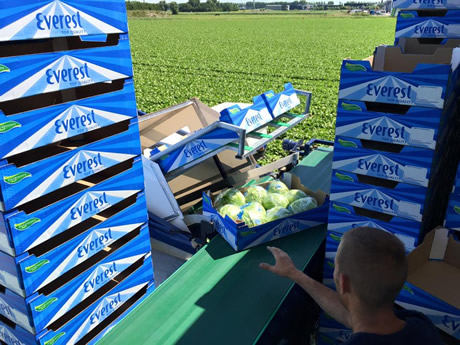 According to the grower, who is also the chairman of the LTO union branch for outdoor vegetables, a major threat to the production of iceberg lettuce is the ban on seed coating, so that the plants aren’t protected during the first five weeks. “An incomprehensible decision. In my opinion, the government should stop hiding their head in the sand, and base their regulations on rational considerations rather than on emotions. Seed coating isn’t dangerous at all, what we’re doing now is more dangerous than what we did in the past.”

“I feel like everything we worked on to produce increasingly environmentally friendlier and more innovatively in this sector in the past 15 years has been undone by this decision. Now, consumers see us spraying more often, and that’s exactly what we don’t want to do with PlanetProof. This is a real unseen killer for growers, and they’re making it very difficult for us to grow lettuce under the current certification requirements.”