From the perspective of project value, the new ‘Sermin’ entrance to the port belongs among the minor strategic projects currently in progress in the Port of Koper, but it has a great symbolic value. For the first time since it opened 60 years ago, the Port of Koper can boast two truck entrances.

Over the decades, the port expanded and its throughput continued to grow. Since the number of trucks was increasing as well, when the new national zoning plan was drafted, an additional entrance to the port was anticipated in the Sermin area.

Nowadays, approximately 1,000 trucks enter and exit the port on a daily basis. Last year, 325,000 truck arrivals were registered. As a comparison, 40% fewer were counted only ten years ago. The large number of trucks is problematic not only from the point of view of the port’s internal logistics, but also from the perspective of the strong impact that they have on the roads into Koper.

With the opening of the new entrance, the trucks directed to Pier II will gradually be re-directed to the Sermin area. According to calculations, in the short term, 40% of all trucks will enter the port through the new entrance. The plan is to also build a third entrance connected to the Bertoki access road, which will further relieve the city roads and at the same time increase traffic flow in the port. 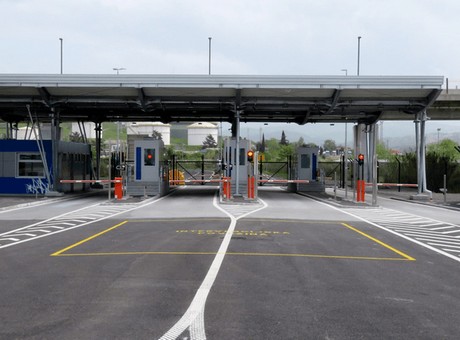 “The new entrance represents a new beginning in the development of the port, which today, more than ever, is facing strong competition. Also the neighbouring ports are aware that the key to success lies in efficient traffic connections with the hinterland. For the time being, we are managing to maintain our leading position in all key areas of business, and we must not lose this advantage. At Luka Koper, we count on the support of all those who bear responsibility for the port’s development and Slovenian logistics in general,” said Dimitrij Zadel, president of the management board of Luka Koper, commenting on the opening of the new entrance.

Container-news.com quoted Minister of Infrastructure Alenka Bratušek, who was the keynote speaker at the opening, as saying how important Luka Koper is to Slovenia, and highlighting the largest infrastructure project that is currently being managed by the Ministry, namely the second railway track between Divača and Koper: “The work being done in this sphere is proceeding as planned, so there are more than enough reasons to be optimistic.”