Seeka's kiwifruit harvest is in full swing across both New Zealand and Australia with the company cautiously assessing the effect of the dry summer with both countries experiencing hot dry conditions. Rainfall in New Zealand was unseasonably low through the first quarter, and in Australia, Shepparton was in drought conditions with temperatures regularly above 40 degrees. 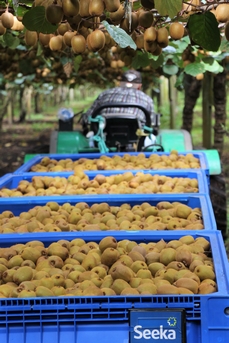 In the case of Hayward, Seeka has processed approximately 30% of its crop. Yields from early orchards were below estimate and the company is watching the next phase of the harvest to ascertain full year crop volume.

Seeka has significantly refurbished its Oakside site including a significant machine upgrade, and had constructed a new packhouse and packing machine at its newly acquired Kerikeri site. Both machines have commissioned well and hit their targeted volumes.

The company also purchased the business of Aongatete Coolstores Limited just prior to the season adding between 4m and 4.5m trays of supply to the group. The Aongatete purchase included experienced staff supported by loyal growers.

Safety through the early part of the season had been a particular focus for Seeka as part of its sustainability drive. The SunGold crop which is increasing in volume puts pressure on labour numbers for a short period. A labour shortage has been declared, and has resulted in some easing of the shortage, but some shifts remain difficult to fully resource. Adding to this pressure, the structure of the early season meant that post-harvest operators worked long hours to achieve premiums for their growers in achieving payment deadlines. Seeka has advocated changes to the structure to deliver a better safety profile.

Seeka has completed the harvest of its Red variety which was successfully picked, packed and exported to Australia. The spectacular fruit has a striking red central star burst on a golden background and with its sweet, berry flavour which has been well received by consumers.

The harvest of Seeka's green kiwifruit grown in Australia is also underway for the domestic and export markets. The team has worked well under dry conditions to produce a great quality crop.

Given the early start, the season is expected to finish in late May. Seeka is satisfied with the service delivered to our growers to date and the fruit's quality and performance to the market. It looks forward to continuing a safe and successful 2019 kiwifruit harvest.