Growing awareness to the need to reduce packaging waste is well attended to at ROP Ltd. a Israeli manufacturer of polypropylene based packaging materials who's known for its modified atmosphere packaging for fresh produce branded ExtendCastTM and FreshCastTM.

"Showing environmental responsibility we've instructed our product development to find ways to reduce packaging by reducing the film gauge while still not compromising its performance protecting the product within," says Liav Bachrach, CEO of ROP. "As a businessman I do not believe in the Producer Responsibility schemes, where manufacturers are required to pay costs of waste management. It is guaranteed that this will not reduce the plastic waste by even 1kg per year. Any fee applied will eventually rolled to the consumers increasing the price the consumers are paying for the product purchased." explains Bachrach.

"I'm afraid that another suggestion recently published by a retailer in the UK which was calling to avoid using of plastic bags on locally grown produce is not the way either" he says and pointing out a strong argument, "you don't throw the baby out with the bathwater. The negative environmental impact of the expected increase in produce wasted due to the avoidance of using packaging to protect its freshness is far greater than the impact of the packaging waste." 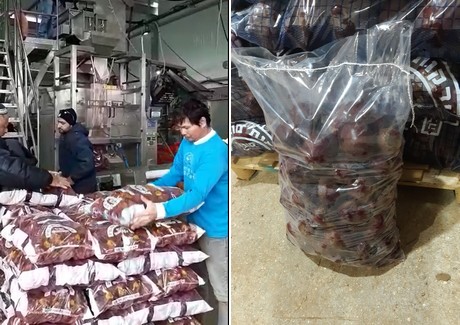 If not Producer Responsibility Fees and not complete avoidance of plastic packaging for locally grown produce, then what could be done to tackle the plastic monster?

Putting his money where his mouth is, Bacharach has allocated the budget for the development of packaging that will adhere to the sustainable approach declared by his company.

Over a year ago the company has published the results of the research and development of Ultra-thin film for bulk packaging of fruit and vegetables. "We've managed to preserve the freshness of sweet cherries, sweet corn, pomegranate, cucumber and lychee for extended period of time by creating protective environment including optimal relative humidity and modified atmosphere, by using of film that is 15-micron in gauge. Alternative bulk bags are 22-30 micron thus the Ultra-thin film represents up to 45% reduction in the plastic packaging used, without compromising its performance." emphasizes Shay Zeltzer, Postharvest specialist of ROP.

"But it's not only Ultra-thin film… we have already supplied the second commercial order to an Israeli grower of root vegetables with whom we've developed an alternative packaging for the high-gauge 25kg bags for beets," says Bachrach. The grower that was using 120-micron PE-based film (bags and roll-stock for FF&S) for years was willing to cooperate with ROP's R&D, testing new low-gauge films for his product. The goal set was to reduce by 50% the amount of plastic. "It wasn't expected to be easy and indeed it wasn't, however I'm excited that we've managed to get the performance required, allowing handling of the beet roots, under harsh condition, in a packaging that is only 80-micron in gauge." "It is as strong as the 120-micron PE-based only that it is cleared, cheaper and much more sustainable with a lot less plastic used. What else could you ask for?" grins Bachrach.

Growers and packers of root vegetables, beets, carrots, turnip, that are selling their product packed in wholesale size packages of 10-25 kg. could now save a lot of money on their packaging material while demonstrating most needed environmental-responsible approach.