ACBD evaluates the alternatives to plastics in Murcia's agricultural sector

ACBD has participated this week in the seminar "Agro-food, circular economy and plastics in the supply chain", organized by Cajamar with the collaboration of Proexport. In his speech, the technical manager of Proexport, Abelardo Hernández, outlined the work that is being carried out by the Operative Group to facilitate the degradation of biodegradable mulches in Murcia's agriculture.

"The complex problems posed by the use of plastics in our society, and particularly in agriculture, do not have a single solution. Therefore, the decision to replace them cannot be radical. We have to study the alternatives to the use of traditional plastics case by case, while we make progress in their sustainable management in those cases in which its use is still better than the alternatives," said Hernández. 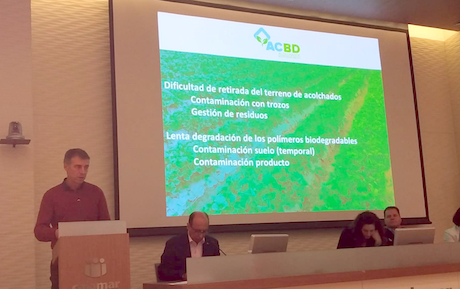 For his part, Sian Sutherland, of A Plastic Planet, explained his proposal to create plastic-free supermarkets or aisles; an initiative that is being carried out in some supermarkets in North London and the Netherlands. He outlined some solutions to reduce or eliminate plastic, such as the use of meshes for fruits and vegetables made with beech wood shavings, or of returnable containers, as it used to be done in the past with glass bottles.

The forum also served to make various proposals to promote a circular economy, including the reuse of waste agricultural material, which becomes raw material for other products. Didier Verhaert de Futamura showed alternatives to plastic packaging, such as cork or materials resulting from composting, which some large supermarket chains already use.

Also attending the event was the Association of Entrepreneurs of the Plastic Sector of the Region of Murcia (Asemuplast). Its president, Ana Ruiz, said that these companies have been recycling for years and asked to prevent the stigmatization of the plastic that is used by the agricultural and food sectors, and which is also a fundamental component in the health system and the automotive industry.

Jesús López, of Cajamar, concluded that there's a need to develop awareness on plastic use in our daily lives, but also advocated an intermediate solution, since it is impossible to completely eliminate plastic.

The Biodegradable Mulches Operating Group (ACBD) is made up of the companies Verdimed, Fruca Marketing, Kernel Export, Bonduelle, Campo de Lorca and the Murcia-based association PROEXPORT. Together, they collaborate with researchers from IMIDA and CEBAS in the development of this agrarian innovation program, which is financed with FEADER funds from the European Union and the CARM, within the framework of the RDP of the Region of Murcia.