Launched this week in South Australia, the campaign urges the community to support growers by purchasing apples that were slightly marked during summer hailstorms.

South Australia’s annual apple crop production is valued at around $63.5 million. The state industry is still adding up the full cost of damages from the 2017 hailstorm but estimates losses at $32 million. It is expected losses from the most recent hailstorm will be similar, with many growers expecting to lose 50 - 70 per cent of their income.

“We have had a summer of damaging weather across the country and many growers have been affected by either drought, flooding, cyclones and more," Hort Innovation CEO Matt Brand said. "Many have lost crops, but importantly, many have nurtured their surviving crops so that we can maintain a steady supply of locally grown fresh fruit and vegetables. These slightly odd shaped, miscoloured or marked fruit are still perfectly edible and are not lacking in nutritional value. Our message to Australians is to look past the outward appearance of your fruit and vegetables and support our growers.” 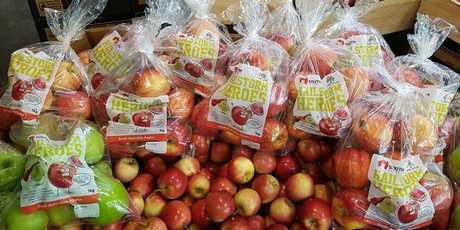 However, through the first instalment of the “Hailstorm Heroes” campaign, more than 1,000 tonnes of fruit was sold initiating more than $1 million in sales revenue for fruit otherwise destined for landfill. The key message being driven home is that while the fruit might have a few spots on the outside, the inside is still delicious and nutritious.

“Growing consumer preference for aesthetically appealing fruit means our growers are having to bin a lot of perfectly edible and nutritious fruit and vegetables,” he said. “Farmgate waste is an ever-increasing concern among our industries that not only takes hard-earned money out of our growers’ pockets but contributes to the global food waste crisis."

Although the campaign is isolated to South Australia, Mr Brand used this opportunity to urge consumers nationwide to reconsider their purchasing habits and not ignore slightly imperfect fruit when selecting fresh produce.

“Hailstorm Heroes” apples are available in the following major retailers across South Australia; Coles, IGA, Foodland and some greengrocers. Woolworths will be selling the fruit as part of their Odd Bunch range.