With pear supplies waning on the domestic market, importers in North America have turned to the offshore season to maintain supplies for the next few months. While South America gets a lot of the attention, some companies have a consistent supply coming from South Africa. F.P.D. East, based in Montreal, begin their South African pear import season at the end of January and with different varieties, have steady supplies up until the end of August.

"We start receiving our South African Bartletts - or Williams - at the end of January, beginning of February, with supplies lasting until the end of this month," shared Peter Martino of F.P.D. East. "Shortly, Golden Russet Boscs will arrive and that season goes from the first week of April to the end of June. Our Forelle pears will also begin in the middle of April and we have supplies all the way through to the end of August."

Martino noted that the crop is running a little earlier than usual, but overall volume is expected to remain the same. "The crop is perhaps around 10 days earlier this year, so we are receiving pears and will also finish the season earlier than usual," he said. "Supplies will be comparable to last year."

South Africa the company's strength
With so many importers choosing South American fruit to fill the shelves during the North American offseason, F.P.D. East have a different approach, opting for South African fruit. The company have established long-lasting partnerships with growers in the country which has now formed the backbone of their offshore season.

"Our strength is South Africa and we have now been doing business there for over 20 years," Martino explained. "The partnerships we have nurtured have led to us sourcing most of our produce from there. Another reason we prefer South Africa is because while many importers ship South American fruit, we maintain a point of difference." 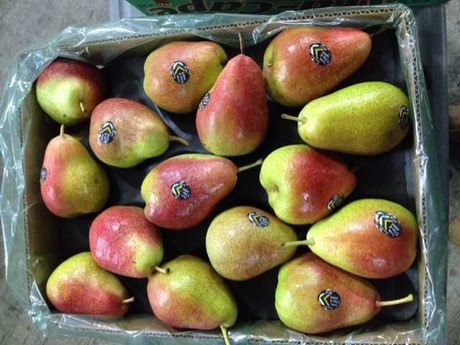 A tray of Forelle pears

He added that Forelle is the pear that is growing the most out of all varieties. "Bartlett and Golden Russet Bosc pears are now a mature commodity. Forelle is seeing excellent growth for us and the marketing window is much longer."

South African pears at CPMA
F.P.D. East will be exhibiting at CPMA next month in Montreal. The company plans to display Golden Russet Bosc and new season Forelle pears at its booth, along with some of their other fruits available at this time of year. Martino said the show is an excellent opportunity for everyone in the industry to gather in the same location.

"We really support the association and have been members since we began as a company 20 years ago," he said. "It's great to have everyone in one place - customers, growers, suppliers. It's an excellent show and we look forward to displaying our pears, including Forelle which will begin in mid April. Along with our pears, we will also be displaying Orri mandarins and Sunrise grapefruit, both from Israel."

"Our produce is distributed across Canada, depending on the commodity," he continued. "For example, our citrus is available coast to coast, while apples and pears are mainly focused in eastern Canada. This year, we have dabbled in a new package design. Rather than shipping pears in regular boxes, we now offer a 2.2kg consumer tray pack that resembles a gift box. So far, it has worked out quite well in Quebec and Ontario, as well as the Maritimes."