The use of high tunnels in the production of cherries is a widespread solution to reduce rain-induced cracking. However, little information is yet available on the effects of these coverings on the physiology of trees and on the quality of cherries in traditional orchards. 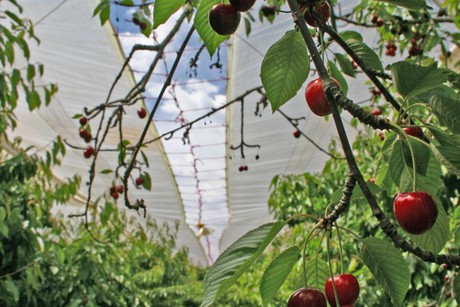 Researchers from the Pontifical Catholic University of Chile in Santiago evaluated the physiological and productive changes of sweet cherry trees grown in tunnels in a Mediterranean climate in the Central Valley of Chile (35° 1' S, 71° 32' W).

In 2017, an experiment was conducted in a commercial orchard evaluating the early and highly productive Royal Dawn cultivar grafted onto MaxMa 14. The trees were grown in a Y shape, with a planting layout of 4.5 x 2.0 m and irrigated by drop with four sprinklers (each with a flow rate of 4 L/h) per tree. Trees under Haygrove® high multi-bay tunnels and trees in the open field (control) were compared for the study. The results of this study were published on March 12 on the journal Scientia Horticulturae.

"The average stomatic conductance value (gs) increased during fruit development, but undercover values were generally 30% higher than in open field - researchers report - Full bloom occurred 4 days earlier undercover and cherry harvesting was 8 days earlier than in open field, with similar production (15 kg/tree). Undercover trees received 20% less water than open field trees. There were no differences in fruit quality between the different areas of the canopy".

The data collected showed that crackings were significantly lower (3%) in trees under tunnels compared to those in the open field (19%). No differences were found in the proportion between leaf area and number of cherries (193 cm2/fruit) between covered and open field trees, but the cherries in covered trees were larger, less sweet and more tender than those harvested in the open field. These characteristics have changed the quality of the fruit and should be improved in relation to the reference market and the requirements for transport and storage.

"The results obtained indicate that the use of high tunnels for the production of Royal Dawn cherries grafted onto MaxMa 14, in a Mediterranean climate, reduces the susceptibility to rain-induced cracking, anticipates harvesting and increases the size of the fruit", conclude the researchers.