It has been one year since the “Nouveaux Champs” Collective launched the “Zero Pesticide Residue” label, driven by Gilles Bertrandias who announced his “ambition of combining the positive aspects of organic farming with those of the conventional agriculture.” It is in February 2018, in southwestern France, that producers of the Lot-et-Garonne and Tarn-et-Garonne departments committed themselves to the approach.

This year, the “Nouveaux Champs” Collective is determined to make its voice heard at the Agricultural Show. This third way seduces consumers because the prices are situated between the classic and organic prices of fruits and vegetables.

Within a year of the launch of the label, 3,000 producers have adopted it in France. Gilles Bertrandias estimates that “10% of the fruits and vegetables we buy today have the ‘zero pesticide residue’ label.”

About the Zero Pesticide Residue approach
The farmers who adopted this label avoid pesticides to the maximum by using nets, different agronomic techniques, crop rotations. They also favor varieties of potatoes, for example, that are more resistant than others. If they happen to use them, they do so sparingly and use pesticides that disappear once the fruit is ripe. In addition, they carry out lab analyses to guarantee that no traces are left at the end. If these analyses reveal traces of pesticide residues, the fruit or vegetable is downgraded.” 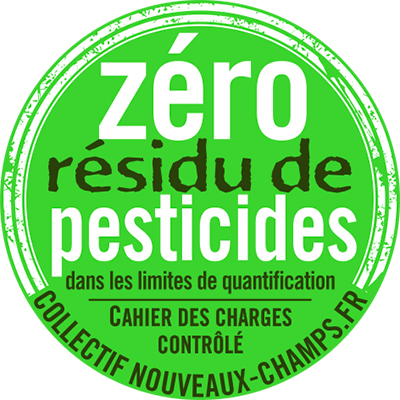