Germany continued to dominate the domestic apple trade with Elstar, Jonagold and Boskoop. Italy mainly contributed Granny Smith and Golden Delicious to the range. France participated mainly with Pink Lady and Jazz. Dutch Boskoop and Elstar and Belgian Braeburn arrived as well. Polish shipments completed events in Berlin; going up to €0.60 per kg there, but generating little attention.

Although availability was limited, this had very little impact on prices. These remained at the same levels in most cases, since demand also decreased. In Frankfurt, meanwhile, the Dutch Honeycrunch dropped slightly. Low temperatures noticeably slowed down customer demand  in Hamburg. In Cologne, many products were too floury. In Munich, the season of domestic Rubinets gradually faded. 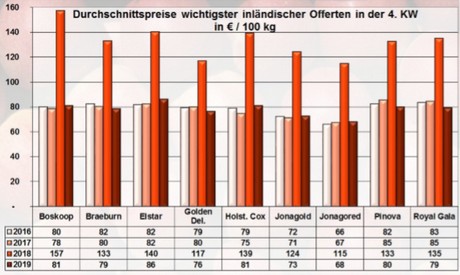 Pears
Marketing of the Abate Fetel and Santa Maria from Italy was uneventful. The mostly low demand could be met without much difficulty.
Table grape
Imports from South Africa dominated the scene. First and foremost there were the Prime Seedless and Flame Seedless, less so the Dan Ben Hannah and Black Gem. From Namibia, the first Thompson Seedless came in, but they were quite expensive.
Oranges
In the orange segment, the Spanish Navelina prevailed. Overall, demand was quite nice; low temperatures accelerated the marketing.

Citrus
Regarding Mandarins, it was Spain that still dominated with the Clemenvilla. Israeli Orri have meanwhile been steadily marketed in all markets, having exceptional organoleptic properties.

Lemon
The Spanish Primofiori ruled here, with the Turkish Enterdonato completing the range. Supply and demand were well-balanced, so that prices rarely changed.
Bananas
Business was uneventful, but often steady. The wet and cold weather partly slowed down demand. Supplies usually were well- balanced with regard to sales opportunities.
Cauliflower
Business was uneven: it was mostly continuous, but halted altogether occasionally. The prices also developed differently: In Frankfurt they solidified, in Hamburg and Munich they dropped off. In Berlin and Hamburg, prices remained mostly constant.
Lettuce
Ice berg lettuce came exclusively from Spain. Supply did not change significantly. Demand was easily met. In some places, prices dropped a little.
Cucumbers
Spanish supplies apparently outweighed the Greek ones. The wintry weather had an impact sales, which slowed noticeably. The marketers then lowered their prices.

Tomatoes
Spanish lots dominated here, followed by Italian, Moroccan and Dutch produce. The cold weather noticeably worsened sales' possibilities. Sometimes, buyers could only be found with difficulty.
Peppers
Overall, predominant Spanish and complementary Turkish lots covered the demand adequately. Sales were quite slow usually. This made prices drop off in many places.