Dutch onion traders have been visiting South Africa, some of whom haven’t imported South African onions for many years. Likewise, some South African companies that haven’t sent to Europe for over a decade are this season considering their options.

The long onion harvest has just started in the important Koue Bokkeveld area, a mainstay of South African onion production and domestic supermarket programmes. Onion producers in other parts of the country like the Northern Cape and Limpopo are closely watching what Cape producers decide to do during this unique onion marketing year. Increased exports from the Western Cape could mean that other regions can plan for larger plantings the coming season. 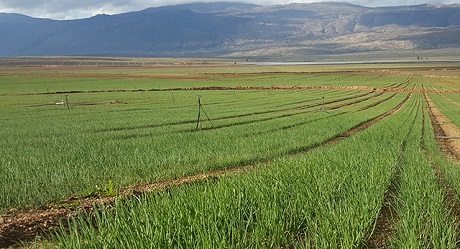 Careful consideration of possible exports
“There are definitely export opportunities since Europe had a bit of a crop failure,” one trader says, “but the European market is very picky, they only want top grade, so we’ve very prudent until we're certain of the new harvest. We don’t usually do onion exports because it’s a very risky undertaking on a relatively low-value crop.”

Europe is looking promising, he notes, but the quality and size of the new harvest will be a decisive factor. Some of the major onion producers have already made some overseas commitments, supplying onions of 60mm to 90mm, but to a large degree they’re still watching the situation.

“Holland’s lower yield opens up some possible opportunities in West Africa, and we’ve had requests from there, but the problem is that transport costs are really high,” a trader explains. “We’ve even had requests from South America, from Asia, and a lot from the UK where they’re looking at a larger size, 60 to 90. You can really see this season that Holland has its finger everywhere in the onion pie.”

The total onion acreage in South Africa, which also exports to Angola and other African countries, is approximately 80 to 90% of total onion plantings in and around the Netherlands.

“However,” he continues, “we send large volumes to local supermarket programmes, which we don’t want to neglect. The European export opportunity this season might very well just be a once-off.” He also notes that there appears to be some buyer resistance in Europe to higher onion prices, which is dampening interest in South African onions from elsewhere in Europe.

Wariness of reports of sky-high onion prices in Europe
Occasional reports from Europe that “the sky is the limit” for onion prices are met with caution by the onion traders to whom FreshPlaza spoke. “There could be some guys who go in like cowboys this season and they could damage the reputation of South African onions. New Zealand is still coming in with their onions, as well as China and India, and I’m just afraid the guys could overreach themselves. Most onion traders are playing their cards close to their chest at the moment but definitely, it’s a unique year in Europe.”

Meanwhile, a market agent in Cape Town tells FreshPlaza that they have certainly not seen any effect on local volumes by possible increased onion exports. If anything, there are too many onions on the market at the moment, he says.