These are just a few of the more than 25,000+ banana-themed items housed at the International Banana Museum, a unique roadside attraction in Mecca, California.

This nine-year-old institution got a bit of a modest start back in 2010. At the time, Fred Garbutt’s family owned a local convenience store with a pub attached on the North Shore of the Salton Sea and while the businesses had been in the family since 1959, Garbutt had other ideas for the pub in particular. He saw how tourists liked to come out and see truly unique local landmarks such as Salvation Mountain and East Jesus and wondered if they could create another attraction. 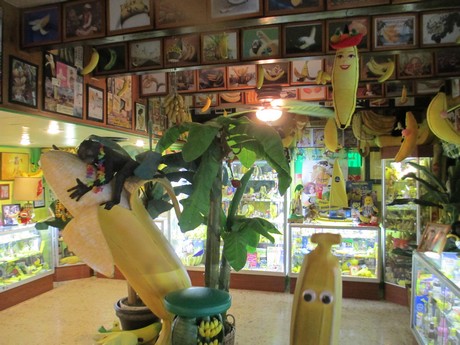 Existing record holder
Enter Ken Bannister. Since 1999, Bannister was the Guinness World Record holder for the Largest Collection of Banana-Related Memorabilia for his 17,000-item collection. And he was selling it.

“I thought it would be fun to convert our bar into an offbeat museum,” says Garbutt. “Especially because it was bananas. If it were any other fruit, I wouldn’t have thought of it but when you think of bananas, you think of fun.”

So with that collection to start, Garbutt spent the next two years adapting the bar and rounding out the collection with additional items to fill in the gaps of banana-themed artefacts. He was also developing a menu of food items his bar could serve—think banana milkshakes and chocolate-dipped bananas.

“And after opening in 2012, with social media where it was at, the museum blew up on there with everyone posting about it,” he says. 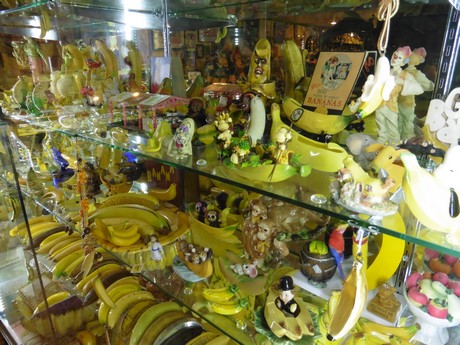 Especially unique items
Today, Garbutt—who says the item that stands out most to him is a banana-shaped record player—continues to look into expanding his collection. “There have been people whose loved ones passed away and they’ve sent me their banana item collection. Another gentleman in Missouri had collected items for 20 years and I bought his collection,” Garbutt says. “There were a lot of vintage items that were fun and helped boost the collection we had.”

And with the museum increasing in attendance from visitors annually, Garbutt is keeping an eye on further growth, though concerns over a lack of restoration plans for the sea hold him back from pursuing expansion for now. (“If the state implements a restoration plan for the sea, then I would know there would be a very bright future of even more tourism coming down to the area,” he says.)

So for now, he continues to welcome the tourists who do come through to take a look at the unique and unusual banana-related items. “I’ve learned over the years that people relate bananas with fun. Think of sayings like ‘Going bananas’ or the old gag of slipping on banana peels,” he says. “And compared to other fruits, it’s such a versatile shape that you could make any kitschy item in banana form.”