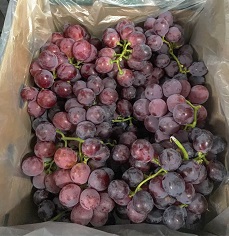 The aftershock of the drought can still be felt in the Olifants River region, says a grape trader. “The grapes look good but the fruit weight is below average. You expect about 5,000 cartons per hectare but when you pack, you see that you’re getting around 3,500 per hectare, so the growers aren’t reaching their estimates, and it’s an after-effect of the drought.”

In the Orange River region the harvest is still seven to ten days behind which has meant that some grape producers couldn’t pack as much for Chinese New Year as they would’ve liked, especially seeing that the celebration comes eleven days earlier than in 2018. These volumes were harvested in week 51, to be inspected and shipped off in week 52. Furthermore, they didn’t have that many grapes of the size demanded by the Chinese market.

Over the past few years Chilean cherries have increasingly dominated the Chinese fruit market during this period and this year, with ever more containers of cherries on their way there, will probably not be an exception. The first cherries have started arriving but, according to the trader, the real effect will be noticeable only when the bulk reaches Chinese shores, and then its impact on grapes (not only those from South Africa, but from Australia, Peru and India too) is swift.

“Precooling for China is very hard on the fruit”
The cold steri protocol for South African grapes to China has been mentioned as an impediment to fruit quality, and some in the industry is of the opinion that Crimson is the only cultivar able to withstand the 72 hours precooling to -0.5°C. “The transit temperature of 0.8°C is ok, but I think it’s the precooling that does the most damage,” the trader says. “It’s very hard on the fruit. The cells in the grape stems freeze and they turn brown as moisture is withdrawn from the fruit. The grapes coming in from the vineyards are around 25°C and over 48 hours we gently cool them down to close to zero, so as not to create a shock to the grapes. I know at some packhouses they set the precooling temperature as low as -2°C in able to get the fruit down to the right temperature in as short a time as possible.”

Canada has been a welcome surprise. Despite reports of the large amounts of American grapes destined for that market, it seems that traders are preferring fresh stock to stored grapes.

There’s a lot of fruit in Europe and the UK, and due to a number of factors the market’s somewhat under pressure. A lot of grapes from Peru and Chile and the many promotions run by stores have had a dampening effect on price points.