Slow start for US imports of Chilean blueberries

It's been a slow start for the Chilean blueberry import season in the US thus far. The market has been low and as a result, the demand for air shipments has been negligible compared with previous years. According to Hugo Diaz of Andean Fruit, it is a continuation from what occurred during the Argentinean import season.

"Shipments of Chilean blueberries began during the first week of December but there have only been small shots of air shipments," he said. "This is because the market has been really low, with prices between $14 - $16. Additionally, Chile has expensive air freight to the United States, further discouraging the need for it. We believe the fruit condition of Argentina's blueberries has had an effect on the market."

Effects of hail storm yet to be felt in US
There have been reports that the overall Chilean blueberry crop is going to be down this year. Diaz noted that growers have been trialing different varieties, which many believe is the cause of the predicted slight downturn in volume. However, he also noted that last month's hail storm might have an effect on what the country exports to the US. 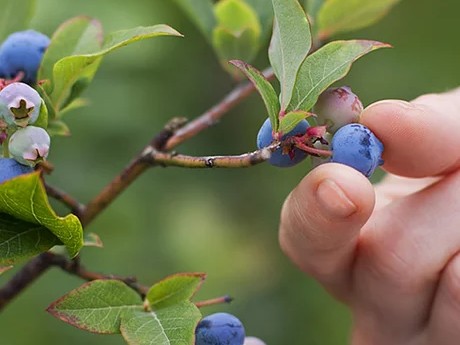 "People have been saying there would be reduced volume this year because of the trialing of new varieties and other crop management exercises," Diaz said. "But there is also the possibility that volume will be down due to November's hail storms which affected the blueberry growing region. It appears that some growers were affected while others weren't. We will have to wait and see how the fruit will arrive in the US, but it would be wise for importers to take precautions."

Other markets dragging Chile down
As mentioned previously, importers believe the poor start to the import season by Argentina has trickled through to the start of the Chilean season, especially for air freighted berries. They hope that it will improve as the season progresses.

"The market is very bad, but price-wise it is good for ocean freighted fruit," Diaz shared. "The Chinese market has also been very poor from the outset, with much lower returns compared with last year. The Chilean season is expected to go through until March so we just hope that the US market will not continue in the same manner as it has done during the Argentinean season."

This may be difficult however, should reports of a giant Peruvian crop be realized. "If Peru does continue to come in with huge volumes, the markets will likely react accordingly and low prices will continue."