“Properly understanding the consumer is all-decisive”

There’s no lack of innovative food concepts. Yet some of them disappear as quickly as they arrive. “Properly understanding consumers is much more than just responding to trends,” say Anneke Ammerlaan and Femke Mosch. They’re involved with the latest developments in the field of eating and consumer trends every day.

With their enterprise Vision on Food, food trend analyst Anneke Ammerlaan and strategic food conceptor Femke Mosch give advice to and support companies that want to innovate but don’t know where to start. “We support them in their innovation process, from trend to concept all the way to the product on the shelf,” Anneke says. “Vision on Food mostly translates trends into products for food companies, from producers to growers, retailers and supermarkets. We research the image of a product, look at how the product can better connect to the general public, and translate this vision into innovative products and concepts that connect with the current context and future opportunities.” 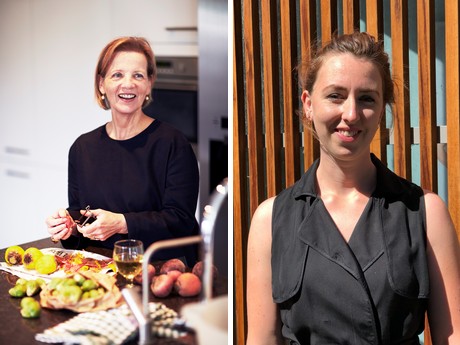 According to Femke, innovative concepts only have a chance of success when a connection to the current market can be found. She mentions it’s not so much products that go out of fashion, but the way they are marketed. “An innovation has to fit the zeitgeist. A good example of this is the new potato department of Dutch supermarket chain Albert Heijn, for which we were also asked for recommendations. Potatoes are still eaten, but the next generation doesn’t know the difference between the different varieties. They want to eat potatoes, but don’t eat them the way their parents did. It’s therefore important to find the relevance of your product for your target audience.” Anneke: “Our strength is that we understand the context of the consumers, and we know what they’re cooking at home.”

Product has to fit the target audience’s zeitgeist
As an example, Femke mentions the rise of meal kits, which aren’t always well thought-out. “For instance, some recipes for two people require half a bell pepper. That’s not exactly convenient, because what’ll you do with the other half? Similar concepts promise convenience but don’t fulfil that promise. This just goes to show how important it is to properly understand the target audience. To test whether a new concept fits the target audience’s zeitgeist, Vision on Food developed a testing system. Nowadays there are so many preconditions that have to be met, and there are so many suppliers you can’t be anything less than outstanding. An innovation for a festive use has different conditions than for daily use. Do you want to reach an average Joe or a yuppie in a big city? Is it a mid-morning snack for when you’re on the road or is it for when you’re sitting on your couch in the evening? It hasn’t become any easier. To market a good product, choices have to be made, otherwise it’ll waver and your chance of success becomes practically non-existent. With a product that’s well thought-out you can stay one step ahead of other companies.”

Fresh produce trends 2019
For Primeur, Anneke and Femke present an idea of the future of fruit and vegetables, which will either get started in the new year or which will be elaborated. What are consumers’ needs, where can the biggest opportunities and challenges be found, and how can food companies respond to that?

Flavour through processing
Vegetables playing a leading role was started a while ago. Yet for food companies it’s still difficult to actually get consumers to eat more vegetables. It’s important they look at vegetables from a different perspective. After all, everyone wants more vegetables on plates. The flavour of vegetables is often still defined as an independent product. People are often not aware that culinary processing adds an additional flavour layer, which is the versatility of vegetables. The processing of courgettes as vegetable spaghetti, for instance, gives a certain structure and flavour sensation. Thicker-cut roasted courgette has a completely different flavour experience. “Processing vegetables offers versatility, and that’s needed to get consumers to eat more vegetables. For example, heavier varieties of cabbage are becoming more trendy again, and the popularity of raw cauliflower and broccoli rice and vegetable spaghetti is persevering.”

Proteins
This trend is inevitable. For example, a protein shake after playing sports, and breakfasting with protein-rich products are both incredibly popular. Proteins are mostly industrial products. Yet fresh produce can definitely find some opportunities with them. Most proteins are legumes. “Legumes are still eaten traditionally. To have a chance of success, bear in mind that young consumers don’t like brown beans but they do like legumes. Casual fast food – trendy food spots where you can sit down to eat, pick up food or have food delivered at home are guiding.” Middle Eastern oriented casual fast food and street food concepts are popular, according to Femke. These use a lot of legumes, and they’re combined in different ways than we’re familiar with. The legumes get a completely different bite and flavour this way, which connects to the zeitgeist of the next generation.

Health
Content components and improving content components is something that’s been given a lot of attention for years. “Consumers are now starting to understand that,” Anneke says. “Particularly because of the ‘quick fix’; quickly getting healthy.” The amount of information regarding content components can be a bit confusing. Everyone knows folic acid, but that’s not the case for lycopene. Besides, the effect of content components on our health is constantly under pressure. Everything has to be scientifically proven. “Take, for instance, the rise of mushrooms containing vitamin D. At the same time there’s also a discussion playing about whether extra vitamin D actually helps bones get stronger.”

Convenience and sustainability
Convenience is the starting point for a lot of companies, and this is often at the expense of sustainability. Consumers are just about done with packaging. “Certain products can’t be sold separately, but big plastic buckets with snack tomatoes, for example, are up for discussion. There’s quite a bit of peer pressure about which packaging are acceptable and which aren’t, even more so than expected. Consumers buy a large packaging more and more, and then distribute it over smaller Tupperware containers at home. The first to introduce sustainable convenience will win the lottery.” In this case it’s about more than just sustainable packaging material. Plastic reduction is almost like a sport. “To-go products, for example, are becoming more unpopular as well. The product has too much packaging, and they’re expensive to boot. Generation Z, the successor of the Millennials, refuses to pay for this. To them, the substantive value is more important, that’s what they want to pay for, not the exterior added value, which is what the (now still deciding) generation of the Millennials is looking for.”

Disaster fruit
Anneke and Femke don’t want to waste too many words on the term ‘waste.’ They know most of the waste occurs at home. According to them, it’s a hyped topic, but it does mean consumers are increasingly aware of what they’re throwing out. ‘Disaster fruit’ could be seen this year, and it will in all likelihood also happen next year. Because of the warm weather, the plums and pears were too small, there was an abundance of snack tomatoes, and rejected pumpkins with small spots made the news. Reports may seem negative for the sector, but consumers don’t experience it as such. “With the plums, for example, it actually gave the consumption a national boost. Naturally, the first cases profit the most. Disaster fruit is not the same as activism against waste. Consumers immediately get a feel for the affected grower, and they want to help.”