Argentina: Majority of blueberry export for US market

Last week a total of 1,239 tons of Argentinian blueberries arrived in different markets worldwide. Another 98 tons were exported by sea, so it’s expected these volumes will arrive the first week of January. This was published by the Argentina Blueberry committee in their weekly update. 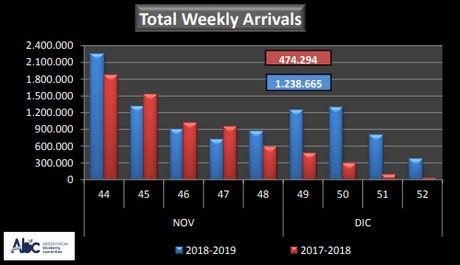 From this total volume, the majority is exported to the United States market, which is 1,033 tons that represents 83%. The rest is received by Europe (7%) and the UK (3%). 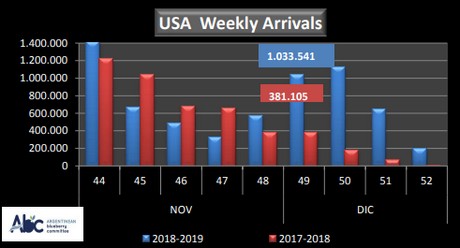 While Chile is now starting its peak season volumes, Argentina is slowly decreasing its export volume. As shown in the graphics below, there has been a rebound in exports during week 49 and week 50 in the total weekly arrivals. However, especially in the US markets, it’s expected to decrease quickly in the coming two weeks.

ABC against child labour
The committee was recognized by the Enterprise Network against Child Labour (Red de empresas contra el trabajo infantil) for its active participation and development of actions in this matter during this year, shares ABC proudly in a press release. They express their full support to the National Plan for Prevention and Eradication of Child Labour and Protection of Adolescent Workers 2018-2022. 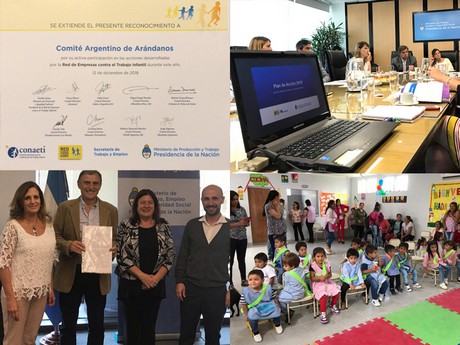 It’s an objective for all members of the sector. More and more blueberry companies are joining the Network. This year was very positive, as the first child care centre was opened for children whose families work in the harvest in Sargento Moya province of Tucumán. Carla Ginobili was present at the ceremony on behalf of ABC: “We hope to replicate this action next year and be able to open more centres in the country. This initiative is essential in order to continue strengthening the rights of those who work in the blueberry industry and as well for their children.”