As part of the 2018 New York Produce Show schedule, FreshPlaza attended the Brooklyn Retail and Urban Agriculture Tour on December 13. The tour visited five different places in various parts of the borough, showing the diverse range of produce activities happening now in Brooklyn. From an urban greenhouse to an open air market, there are a lot of dynamic developments here, which could make Brooklyn a barometer for the future of the American produce landscape.

Urban greenhouse strives to attract young people into agriculture
Urban greenhouses are becoming less of a novelty and more of an accepted option for locally-grown produce. This is certainly the case in Brooklyn, with a number of urban greenhouses popping up in recent years. One of these is Square Roots, which was the first stop on the tour. Square Roots is located in a former Pfizer factory in the Williamsburg district and grows primarily herbs along with other greens in shipping containers that have been climate controlled and fitted out with grow lights, water systems and atmosphere control.

The company uses plenty of technology to help it operate and delivers within the local area to stores and restaurants. One of the primary drivers of the company is to draw in more young people into agriculture. "The average age of the American farmer is 58," noted tour leader Karsten Ch'ien of Square Roots. "Growing produce in an urban greenhouse attracts more young people with a passion for farming. A combination of high-tech equipment, the fact that more young people live in large cities with limited land area, and the interest in healthy and locally-grown food has helped drive the growth of urban greenhouses. Square Roots offers training programs and skill building in agriculture to give young people with a passion for fresh produce an opportunity to be a farmer." 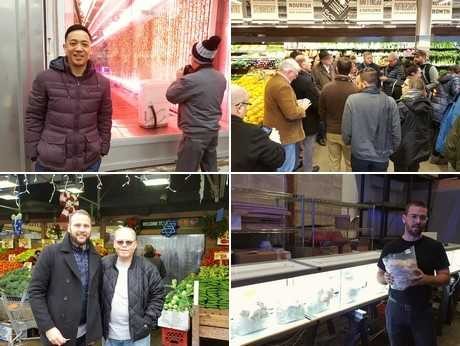 On-the-go and convenience prominent
As a busy metropolis in its own right, the trend of convenient, on-the-go produce has established itself firmly in Brooklyn. Two of the stores visited as part of the tour, City Acres in Williamsburg, and Brooklyn Fare in the downtown area, were heavily stocked with a range of pre-packaged salads, healthy meals as well as juices and other healthy drinks.

In City Acres, along with a significant range of organic options, was a section devoted to fresh-cut fruits and vegetables in clamshells. They were all common produce items such as watermelons, cantaloupe, broccoli, cauliflower, and many others, cut up in store to serve the busy patrons. Brooklyn Fare offered cut vegetables and prepared salads by the pound. Each store had a large organic section as well as offering a diverse range of exotic and on-trend fruits and vegetables. 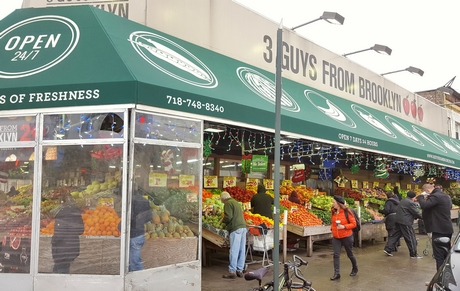 Traditional style open-air markets still have a place
After visiting the gentrified Williamsburg area, the tour continued to the southwest of Brooklyn to one of the few remaining open-air markets in New York City - Three Guys From Brooklyn. Established in 1975, the store never closes and despite the wintry conditions, the array of fruits and vegetables displayed brought a burst of color into the grey day. Here the owners have kept their traditional method of selling high-volume, low-cost fruits and vegetables to serve the local community, from which many nations are represented.

"This is a very diverse neighborhood and our customers prefer the traditional feel and experience of purchasing fruits and vegetables," explained Philip Penta of Three Guys. "Although the cut and prepared market is a growth point, we also focus on growing our wholesale business with local restaurants and hotels. When modernizing, we are careful what we add to make sure we retain the character of the market while also keeping up with modern trends like loyalty cards and home deliveries."

Running this type of market comes with its challenges, but Penta said it is working well for them. "It's very difficult to remain open 24/7 every single day of the year. However, we need to have staff overnight to accept deliveries so we might as well stay open. 25 percent of our business occurs between 10pm and 6am which is remarkable to think about." 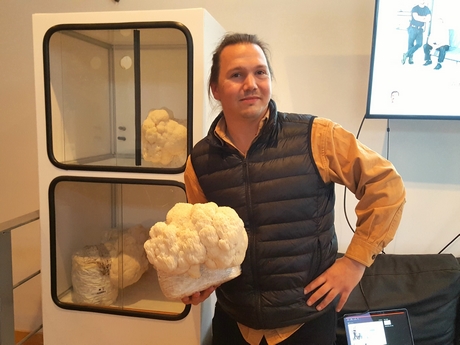 New York City's only mushroom farm
After having lunch at Wholefoods and observing the Gotham Greens greenhouse on the store's rooftop, the tour continued towards the Navy Yard to a simple red brick building with no other sign than "No Parking" on the garage. Inside was an entirely different world as we stepped into not only the only organic farm in New York City, but also the only mushroom farm - Smallhold. Not only that, but this farm operates very differently to the traditional grow and sell method. As the name suggests, Smallhold sets up micro-mushroom farms on customers' premises, to offer what is described as "hyper-local" produce. From there, Smallhold maintains control of the farms from its Brooklyn office and workshop.

"We provide a service whereby stores and restaurants can grow their own mushrooms right on the premises," explained co-founder Adam Carter. "If it's a store, they can sell the mushrooms to customers, or in the case of a restaurant, use them in dishes. We nurture the mycelium from which the mushrooms grow until they are ready to grow, then deliver them to the customer's climate-controlled mushroom farm which we set up. Smallhold maintains control of all systems, including airflow, CO2, and temperature. We currently grow ten different mushroom varieties, with oyster being the most popular."

Brooklyn's diversity offers many opportunities
With modern produce trends, customers are seeing more convenience and on-the-go offerings in stores. But Brooklyn is home to many different cultures and backgrounds and therefore the traditional high volume, low-cost, open-air markets are still thriving. The tour also demonstrated there are many young people and other urban dwellers with a passion for agriculture and they have embraced urban farming as a way in which "locally-grown" will have a viable future in big cities.