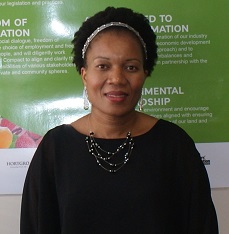 South Africa has in the past missed some opportunities in pushing its agricultural agenda during broader trade negotiations, says Dr Konanani Liphadzi, Fruit SA CEO (right), but she considers that the recent change in government has brought an increased appreciation of the value of the fruit sector for the South African economy.

“We were in Beijing last month and at the same time a Chinese delegation was in South Africa engaging with the Department of Agriculture, Forestry and Fisheries on the issues of pears and citrus [South African pears are next in line to be granted access to China while the latter wants access for its citrus to South Africa]. The vibe that we got from the Chinese side is that they’re prioritising our issues and I hope that in 2019 access for pears will be granted. There is a sense of renewed urgency to then move to our avocados because it’s a crop they want.”

Fruit industry different in a good way
“The fruit industry is different from other agricultural sectors and it’s different in a good way, it’s export-oriented while we were also the first industry to bring in a programme that promotes ethical standards, through SIZA, which is good for workers and good for farmers. About 60% of our fruit is exported and if we could export more, we would,” says the Kansas State University-trained agronomist. “The current investment in the sector is huge with lots of new hectares but that expansion will be threatened if we don’t find new markets.”

A case in point is the ongoing dispute between South Africa and the European Union on citrus black spot (CBS), which she unequivocally calls a non-tariff barrier. “This shows the need to diversify away from a reliance on the European market.”

Another point on which the Ramaphosa presidency gives her hope, is his commitment to fast track the matter of title deeds, which has been a paradox of South African land reform: there are black farmers who cannot obtain the title deeds to the land they’ve been farming (for 25 years in some cases) because of an unhelpful mixture of political lethargy and bureaucratic sloth, with the result that no bank will extend them credit.

“The key is political will. Giving farmers their title deeds will unlock a lot of potential for those farmers to access financing and get the most value from their crops through exports. We don’t want black growers to just produce for the local market. At the end of the day you want a single industry which is not differentiated by race, ethnicity or gender.” 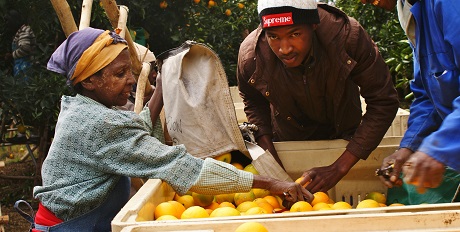 Distinction between land ownership and farm management
Inclusivity and transformation of the fruit sector is an important mandate of Fruit SA, one undertaken by the various fruit organisations according to their capacity and one which, Dr Liphadzi takes pains to point out, is driven by farmers themselves. “The growers themselves with the assistance of the industry associations are doing the work of transformation, whether it’s supporting new black farmers or bringing in new black owners in the form of workers or entrepreneurs.”

A point of contention in South African land reform has been the role community-owned farms which, on the whole, haven’t had a felicitous track record. “My personal opinion is that you can’t run a business as a community. In my past life as a public servant [she was chief director at the Gauteng Department of Agriculture and Rural Development before joining Fruit SA in 2014] I saw community projects where most of the time you’re just dealing with interpersonal issues instead of getting down to the business of farming.”

“Of course,” she continues, ”you can’t divorce communities from their land and I think this is where we as an industry can encourage communities to structure themselves so that they are beneficiaries and owners, but to get managers to run the farming side. Being the owner of the land doesn’t mean you have to physically farm the land.”

SIZA audit takes climate change into account
In future all production issues will be framed by climate change. “No agricultural entity can ignore it and that is why we have added an environmental module to the SIZA standard. We’ve also funded a carbon footprint platform to determine the sector’s carbon footprint. However, this past drought in the Western Cape showed that we don’t need to preach to farmers, the climate dictates increased sustainability.”

Does she foresee a time when expansion to the fruit industry is halted because of climate change and water shortages? “No, I believe the technology’s going to improve and we’ll find ways to produce more with the same amount of water or through improved varieties. I think there’s still a big scope for improvement in terms of technology.”

“We’re in a wonderful space, growing rapidly, with lots of opportunities and creating jobs. From where I sit the future looks bright. People are investing in new plantings and that’s a long-term investment and for me, it shows people who have faith that they’ll reap the benefits of their investment in ten years’ time and that says a lot.”